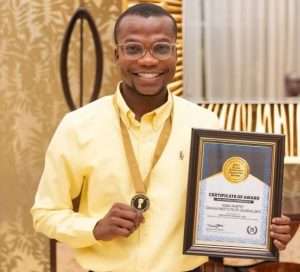 The former student leader makes history by becoming the first to win this newly created category at a ceremony which formed part of the GJA’s 70th Anniversary celebration.

He was among some 78 practicing journalists and veterans awarded for their exceptional role in national development through the pen and the microphone.

The activist was tipped as the choice for the award having consistently aired his views on political leadership through thought-provoking articles published weekly on 3news.com and other online media.

Kabu Nartey recently graduated from the Ghana Institute of Journalism with a first class honours. He also received two awards – the Best Student in Print Journalism and the Most Promising Student Journalist.

A month after graduating, he began a weekly publication on national issues in the country with a famous tagline ‘Patriotic Epistles with Kabu Nartey’. He has since written on very topical subjects advocating for good governance, patriotism and responsive leadership.

In an interview, Kabu Nartey said the recognition came as a surprise as he did not see it coming after his recent graduation, adding that “ it is a boost to my earnest search for inner patriotism for my beloved country”.

He acknowledged Akushika Acquaye of GTV for her mentorship when he first worked as an intern at the state broadcaster. Next were his lecturers at GIJ and his colleagues who shaped his dream in diverse ways.

The GJA Best Student Journalist award was introduced recently to inspire and motivate journalism and communications students across the country who are already impacting their society and nation through works.

The Eastern Regional chapter of the Ghana Journalists Association (GJA) has distributed 50 pieces of locally manufactured nose masks to...

The president of the Ghana Journalists Association, Mr. Affail Monney has charged journalists to ensure that peace is preeminent in...