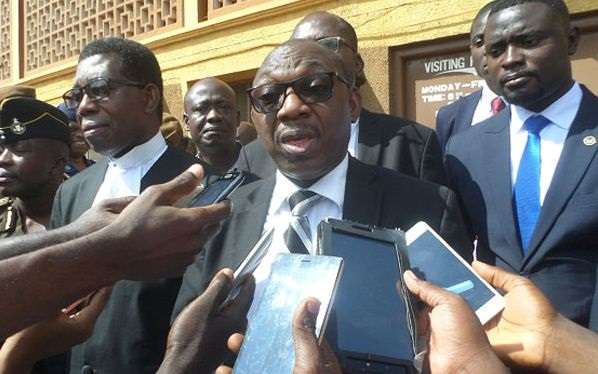 An Appeal’s Court judge, Justice Jackson Clemence Honyenuga, who has been nominated to the Supreme Court, has apologized for publicly endorsing President Akufo-Addo who is seeking re-election in the forthcoming elections.

“In reading that statement, we didn’t intend in endorsing the president, our understanding was that we were wishing him well…

“On my part if out of political dissatisfaction, some people are unhappy with whatever I am supposed to have said then I am sorry,” Justice Honyenuga told Parliament on Monday, 11 May 2020 while being vetted by the Appointments Committee.

The judge courted public displeasure in early March after the endorsement was widely criticized for being partisan, contrary to the code of ethics for judges as well as chiefs.

“It is our hope that with your vision and special gains you have made in the economy in your first term, Ghanaians may consider giving you another four years,” the judge who is the Paramount Chief of Nyagbo Traditional Area with the stool name Torgbui Ashui Nyagasi V, said in February. The event was a durbar of chiefs and people of Golokwati, Afadzato South in honor of President Akufo-Addo who was on a tour of the Volta and Oti regions.

Article 55(2) of the 1992 Constitution of Ghana among others forbid judges from publicly endorsing or publicly opposing another candidate for political office. The Constitution also bars chiefs from taking part in partisan politics.

Justice Honyenuga is the judge in the criminal trial of former COCOBOD boss, Dr. Stephen Opuni and businessman Seidu Agongo at the High Court. The case has been cited by government officials including the president as a proof of alleged corrupt officials in the previous administration being prosecuted.

“If I were to advise the president; if I had the opportunity I will say, Sir drop him,” Mr. Baako had stressed.

When the Member of Parliament for Asawase, Mohammed Mubarak Muntaka enquired what he makes of Mr. Baako’s statement, he simply replied, “every Ghanaian is entitled to his or her view”.

Meanwhile, Justice Honyenuga told the Appointments Committee that the statement he read was originally meant to be read by the “host paramount chief” who was “not well”.

He admitted reading the speech before the event but said he could not recall the person who gave him the speech.

An attempt by the MP to push the judge to answer whether he would heed calls for him to recuse himself from the Opuni’s case was disallowed by the Chairman of the Appointments Committee.

Justice Honyenuga was asked if he would not write a differed opinion if he was made to read a judgement for a group, and he doesn’t agree with the group’s position.

He answered, “I said I am sorry if anybody is offended, I thought that would end that”.

He was further asked if he was partisan, and he emphatically answered in the negative, “no”, adding that he has never been a member of any political party.