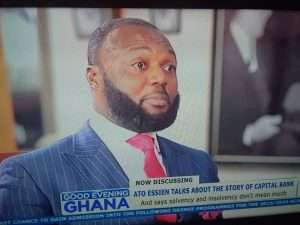 Former Chief Executive Officer of defunct Capital Bank Ato Essien says he was shocked when the public narrative was turned against him following the dissolution of his former bank.

According to him, he has accounted for every money to the Economic and Organised Crime Office (EOCO), which investigated him after the collapse of the bank in 2017.

Mr Essien made this known in an interview on Metro TV’s Good Evening Ghana on Thursday, September 26.

It was the first time he was speaking about the circumstances that led to the ceding of Capital Bank to GCB Bank Limited by the Bank of Ghana.

Capital Bank together with UT Bank were the first universal banks to go down as a result of the reforms of the sector by the Dr Ernest Addison-led administration.

Assets and liabilities of the two banks were taken over by GCB Bank Limited on August 14, 2017 at the start of the banking sector reforms.

The Central Bank claimed the two banks were poorly managed, plunging them into insolvency.

Reports suggested that Mr Essien, as a majority shareholder in Capital Bank, had used borrowed monies to set up another financial institution First Capital Plus Bank.

He denied this assertion.

“Paul, while I was crying because I had lost a child,” he said in Fante, “I was also being insulted”.

“That was when I got amazed how narratives can be turned and twisted and in the absence of information people can [say] all kinds of things.”

He said he had to wait for EOCO’s probe before coming out with the full facts.

“I released a press statement to say this matter is under EOCO so please be patient. EOCO is currently working on and in due time every money will be duly accounted for.

“And very money has been duly accounted for.”

Lawyers of Willaim Ato Essien, the founder of the defunct Capital Bank, who is standing trial for allegedly collapsing the...

Some 37 former workers of the GCB Bank Ghana Limited have dragged the nation's foremost commercial bank to the Commission...

26 charges levelled against Ato Essien & 3 others