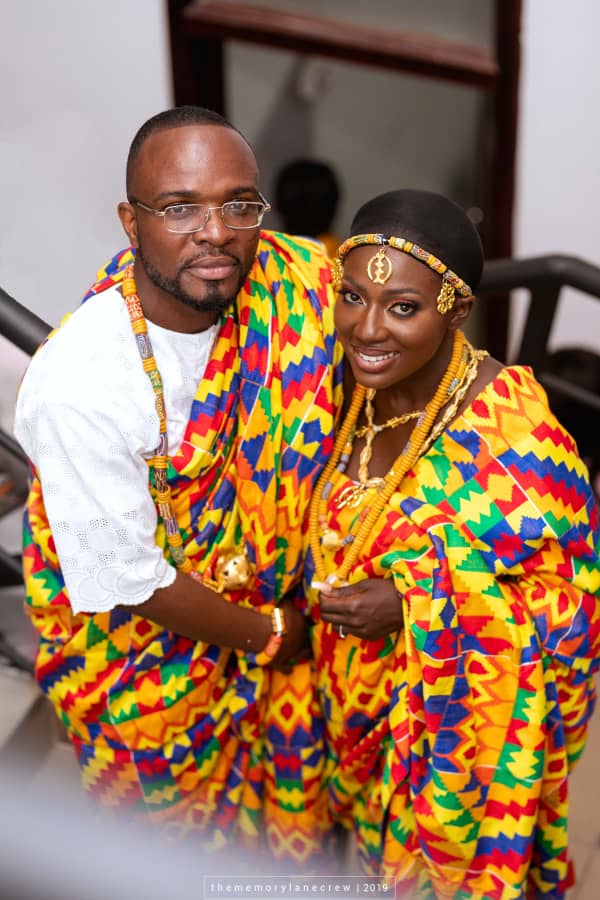 Director of the National Folklore Board, Nana Adjoa Adobea Asante at the weekend tied the knot with her childhood sweetheart, Andrew Nii Adjei Khartey. The marriage ceremony between the two lawyers kicked-start on October 3 with traditional marriage and climaxed on the October 5 with the sacramental marriage. In attendance were a host of dignitaries including Shi Ting Wang, China’s Ambassador to Ghana; Mr. Edward Boateng, Ghana’s Ambassador to China; Joseph Osei-Wusu, 1st Deputy Speaker of Parliament; Francis Asenso- Boakye, Deputy Chief of Staff and Dr. Ziblim Iddi, Deputy Minister for Tourism, Arts and Culture; Others were Mr. Akwasi Agyeman, CEO of the Ghana Tourism Authority; Nana Boakye, NPP Youth Organizer; Josephine Nkrumah, Chairperson of the NCCE and Rev. Dr. Joyce Aryee. 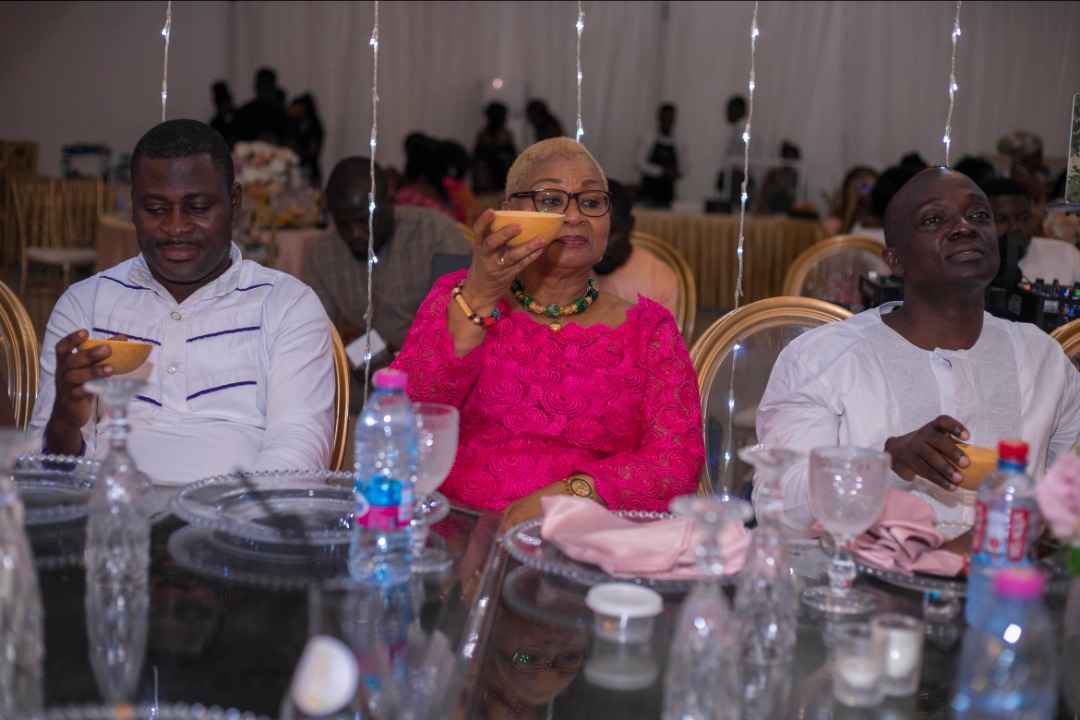 The creative arts industry was also well-represented by Agya Koo Nimo, Trigmatic, Obour, Professor Esi Sutherland-Addy, Nana Asaase and Bob Smith Jnr a.k.a Diabolo man. Traditional marriage Dubbed #thefolkloricwedding!, the wedding event was characterised by rich cultural exposition as the groom and the bride together with their friends  and families made an impressive statement on the need to infuse rich Ghanaian culture into all celebrations.

Their traditional marriage was a very colorful and showcased Ghana’s rich kente in various patterns and colors. 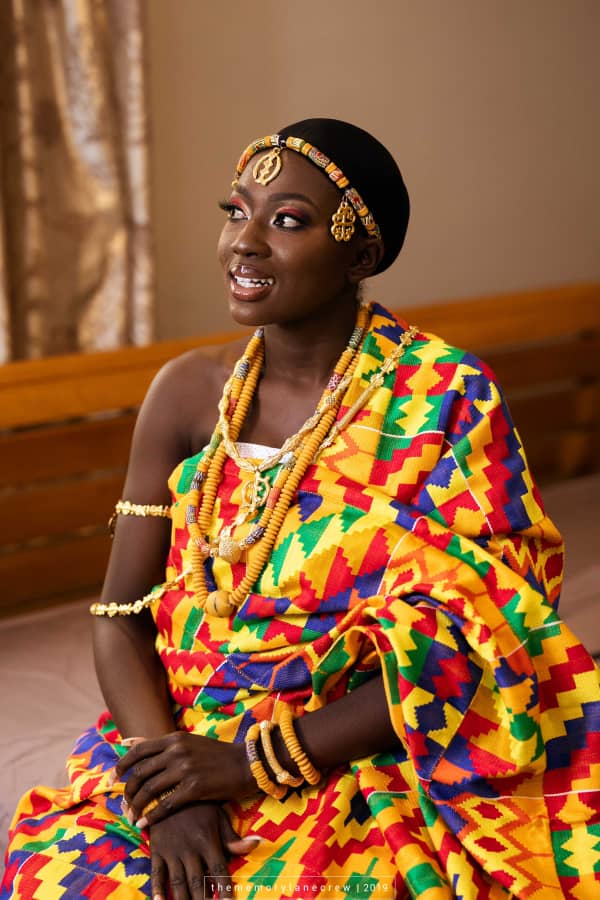 The bride, whose institution is responsible for the promotion of folklore including kente and our adinkra symbols, indeed, used her marriage ceremony to promote these elements of folklore. As the rains started, guests were compelled to pull out umbrellas embossed with the “Ɔdɔ Nyera Fie Kwan” logo, shared as souvenirs by the couple.
READ ALSO:  May your soul rest well with the Lord – Nana Ama mourns Nana Ampadu

The bride’s rhythmic ‘adowa’ movements coupled with her beautiful ‘dansikran’ attire were a sight to behold. White wedding On the day of the white wedding, Nana Adjoa Adobea Asante walked the aisle of the St. Bakhita Catholic Church amidst the fine tune of the ‘Seprewa’ played by Aaron Bebe and a melodious solo rendered by Eddie Gaisie. 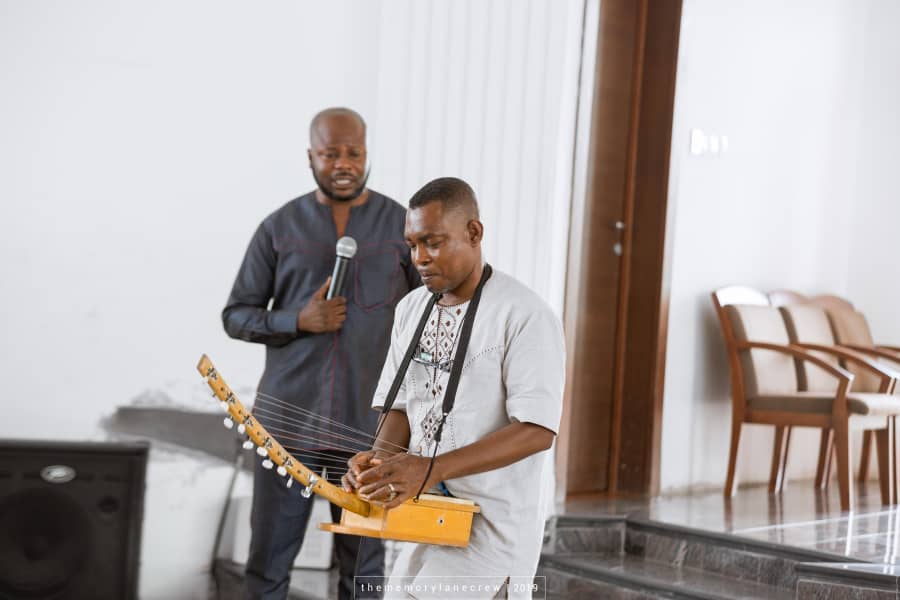 This was the Seprewa bridal entrance, a shift from the usual bridal march songs played at weddings. Her elegantly made bespoke Kente gown brought out the splendour in the Ghanaian bride. Their flower girls heralded her walk down the aisle with the colourful throwing of flowers from golden calabashes instead of the usual modernized flower girl baskets. 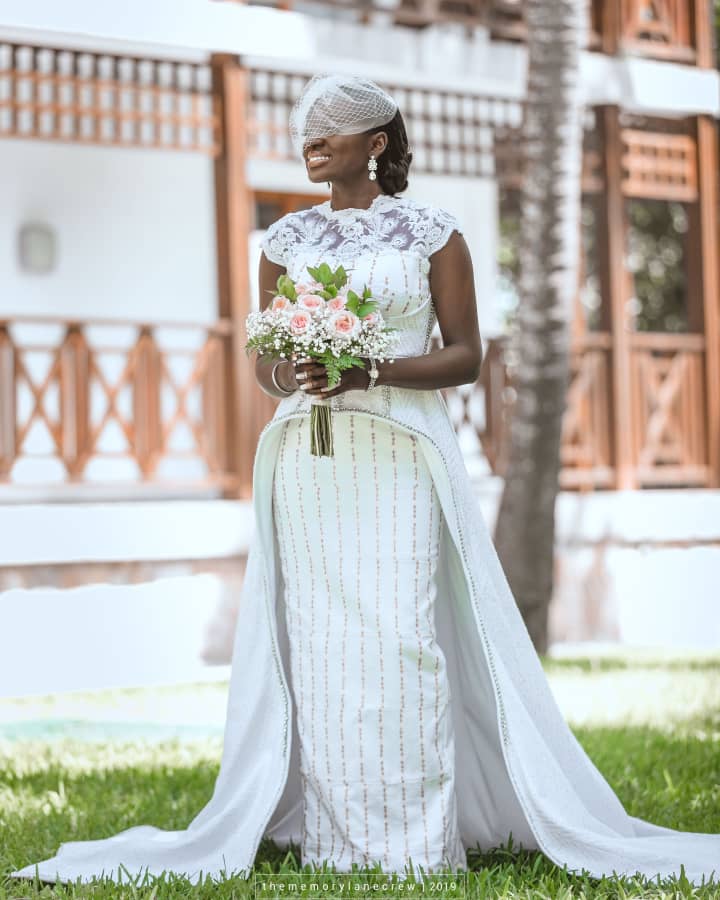 The ring bearer, had in his box a cute ‘Adinkra’ symbol ring box which had and read the symbol ”Ɔdɔ Nyera Fie Kwan”. 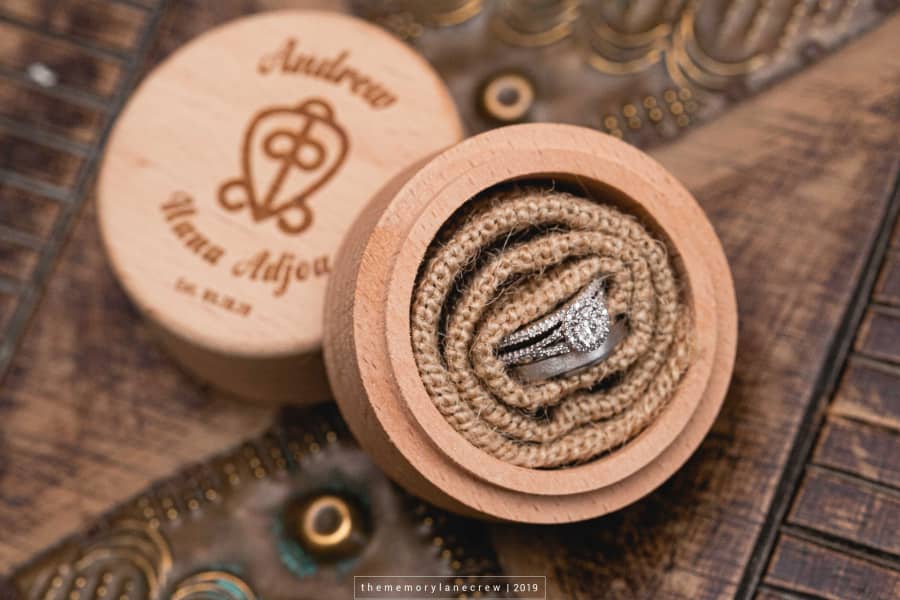 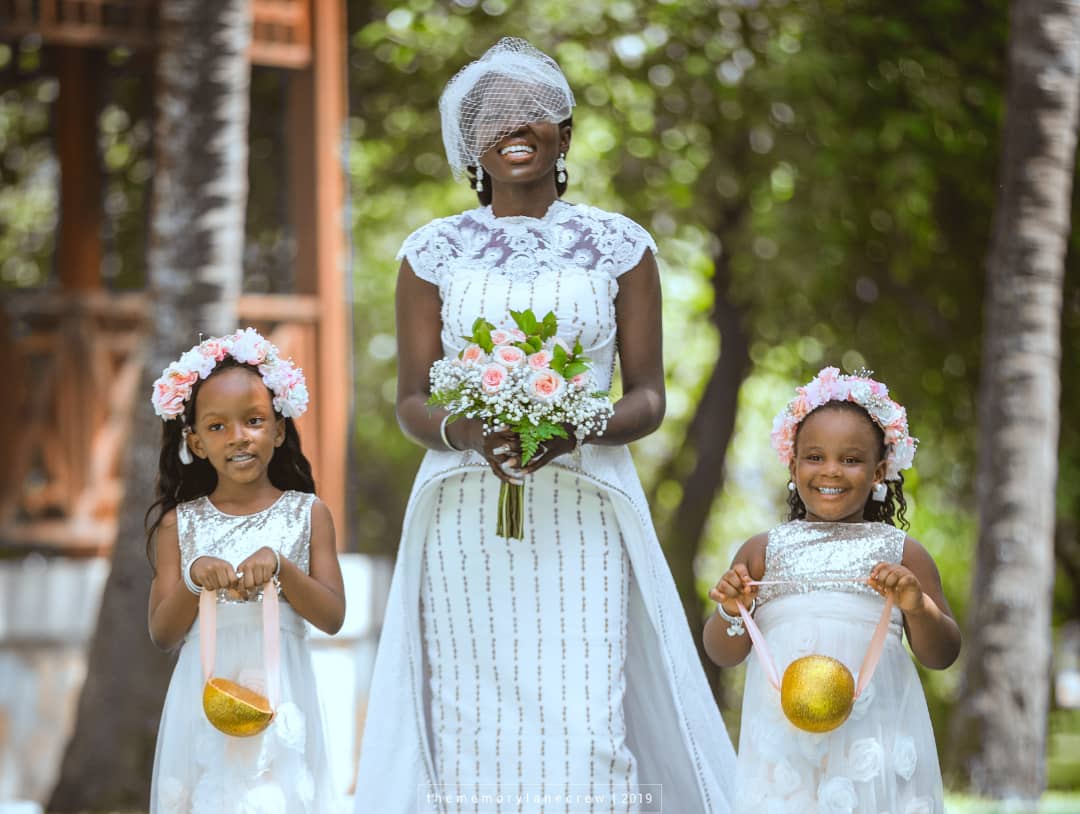 Dinner At the end of the day, a dinner was held at the Unique Floral Events grounds at La, which gave everyone a ‘cultural shock’ as the anticipated champagne popping and toast was replaced with the traditional gourds containing rich Ghanaian palm wine tapped from the finest palm trees.

Amidst a wonderful display of poetry from Nana Asaase, the gourds went round as guests filled their calabashes with palm wine and the toast was rendered. 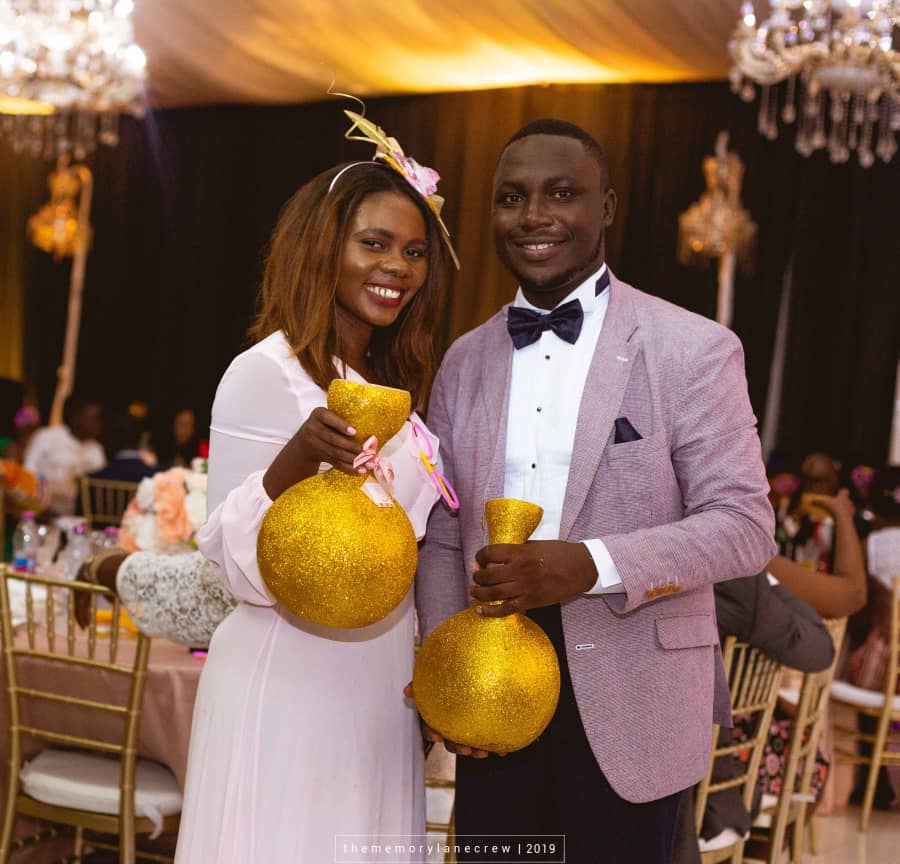 This was a drastic shift from the norm. One that went with applause amidst awe and admiration for the courage gathered to showcase such beautiful tradition at a once in a lifetime event like a wedding. It was perfect! The tables were marked with various Adinkra table markers that sought to tell the journey so far of both Andrew and Nana Adjoa and the journey that awaits them.
READ ALSO:  Uncle Ebo Whyte endorses Kobina Ansah as his successor
By Inievents Ghana|3news.com|Ghana]]>