IPRAN to make registration centres ‘not conducive’ for EC 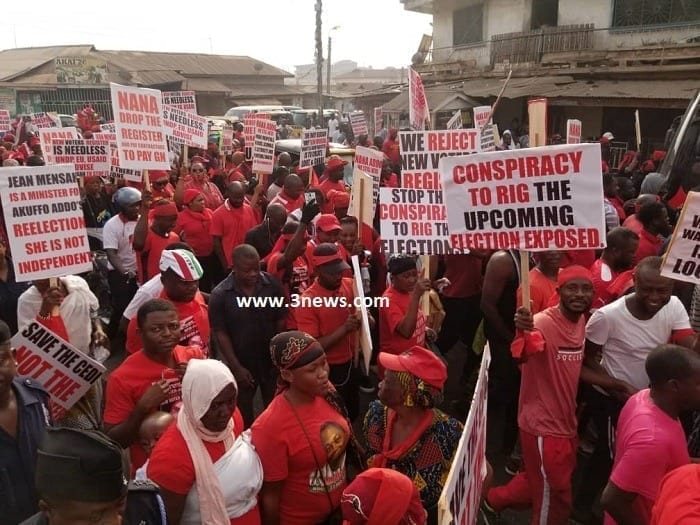 Convener of the Inter-Party Resistance Against the New Voter Register (IPRAN) Bernard Mornah has served notice that his group will make sure the intended compilation by the Electoral Commission, Ghana (EC) does not take place.

The EC has scheduled next month for the exercise, having already rolled out sensitization campaign on safety measures to be observed at the various registration centres.

The resistance to the move to compile a new register has been a prime agenda of IPRAN and members have demonstrated their displeasure at the move with street protests and petitions to some key personalities including former President Jerry John Rawlings.

Addressing journalists in Accra on Tuesday, Convener Mornah, who is also the National Chairman of the People’s National Convention (PNC), said nobody should doubt their capacity to resist the exercise.

“On that day when they go there and realise that the environment is not conducive, they will know that resistance has taken place,” he stated.

The Commission has scheduled a meeting with the Inter-Party Advisory Committee (IPAC) including some members of the diplomatic corps and civil society to apprise them of the progress made so far for the impending exercise.

The meeting on Wednesday, May 27 has been grouped into two as a result of the ban on social gathering.

But the National Democratic Congress (NDC), billed to attend the meeting with the New Patriotic party (NPP) at the same time, has served notice it will not be part of it.

IPRAN says the Jean Mensa-led EC must not be allowed to jeopardise the hard-won democracy the country has been known for.

“We assure you we will resist. You doubt our capacity to resist? If they will not listen to common sense, we will not allow no-sense too to prevail. Common sense must prevail and not no-sense,” Mr Mornah warned.

“The Electoral Commission cannot just because of what they will eat, that is GH¢28,950,150 per diem to risk all of us. We will resist. We are not flexing muscles.”

The date for the start of the compilation of the controversial new voter register could be Tuesday, June 30, 2020....

The National Democratic Congress (NDC) and other opposition parties on Friday petitioned the Overlord of the Mamprugu Traditional Area, Naa...

I still stand by my comments – Boakye-Djan