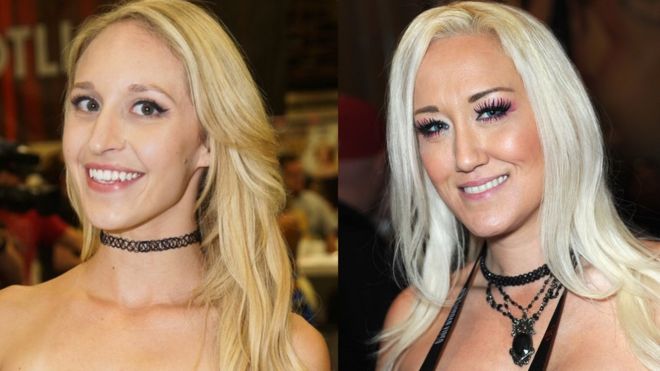 “I should be able to model my Instagram account on Sharon Stone or any other verified profile, but the reality is that doing that would get me deleted,” says Alana Evans, president of the Adult Performers Actors Guild and one of the leading voices in the battle that adult stars are waging to stay on the platform.

Ms Evans’ group has collected a list of more than 1,300 performers who claim that their accounts have been deleted by Instagram’s content moderators for violations of the site’s community standards, despite not showing any nudity or sex.

“They discriminate against us because they don’t like what we do for a living,” Ms Evans says.

The campaigning led to a meeting with Instagram representatives in June, followed by the establishment of a new appeal system for removed accounts. During the summer, however, the talks halted and accounts belonging to adult performers have continued to be deleted.

“When I saw that Jessica’s account was deleted, my heart sunk. It was the last straw,” she says.

The account, which is followed by more than 900,000 people, was later reinstated.

In late 2018, adult performers say, an individual or a number of individuals started a co-ordinated campaign to report accounts to social media platforms, with the clear intent of having them removed.

This was often followed by harassment and intimidation, in the form of abusive messages. An anonymous individual – known in the industry as “Omid” – frequently boasted of being personally responsible for hundreds of deletions.

Adult performer and sex workers’ rights activist Ginger Banks was one of the first targets of the campaign.

“When you put time and effort into building an account with over 300,000 followers and it gets deleted, that makes you feel defeated,” she says. “Even if you’re following the rules, you still have your account deleted. And that’s the part that’s frustrating.”

Ms Banks says that removing adult performers and sex workers from social media is another way of marginalising these groups by removing them from their primary – or, in some cases, only – marketing channel.

“The people reporting us don’t understand that people’s incomes are affected, or they don’t care. They think that we shouldn’t be doing this job or it shouldn’t exist.”

Adult production houses often consider the size of a performer’s Instagram following when casting for new scenes. When a performer has their account deleted, they lose access to the fans and the business connections they’ve built up – with a potentially significant impact on their income and livelihood.

Many posts leave little to the imagination, but performers contend that the guidelines are too vague and inconsistent in their enforcement.

“I’ve never posted explicit images on Instagram. But even a picture of me wearing leggings could be extremely provocative to someone, and worthy of being reported,” says Ginger Banks. “We’re letting these businesses determine what is art and what is pornography, and then punish us.”

A spokesperson for Facebook, which owns Instagram, told the BBC: “With such a globally diverse community, we have to put rules in place around nudity and sexual solicitation to ensure content is appropriate for everyone, particularly young people.

“We will take action on content reported to us if it breaks these rules. We give people the opportunity to appeal the decision and will reinstate content if we mistakenly remove something.”

The training materials used by moderators to enforce these guidelines, however, are not public. Sex workers fear that Facebook places being acceptable to the most conservative audiences around the world before fairness and freedom of expression.

“There is also a culture in Silicon Valley that tends to infantilise the audience,” he says. “Facebook is launching a dating service called Crushes, while having strict rules about sexual chat, even between consensual adults and [even when it is] non-commercial.”

Art caught in the net

Adult stars and sex workers aren’t the only ones affected. Rachel Rabbit White, a writer, poet and artist, had her account deleted for sharing pictures from an exhibition titled The Revolutionary Art of Queer Sex Work at the Leslie-Lohman Museum in New York.

“I posted these archival, very important historic images of lesbian erotica from an esteemed gallery,” she says. “I was careful not to get any of the ones that had nipples or genital nudity. But a couple of hours later my account was gone.” It has since been reactivated.

Pole dancer and blogger Bloggeronpole is one of the founders of EveryBODYVisible, a campaign started after Instagram took action against pole dancing hashtags this summer. Hashtags such as #poledancing and #femalefitness returned zero results in search. The platform has later apologised and changed its policy, but it still blocks or restricts hashtags that might be used to share content in violation of the guidelines.

“Celebrities keep their pictures, but we can’t even post a video of us working out in a bikini,” says Bloggeronpole. “If you are using your body in one way or another, even for education or to promote body positivity, you can’t do it anymore because of the way social media is being run.”

Another London-based pole dancer, Cinderella Jewels, says she uses Instagram to showcase her “pole journey”, but the removal of the first account she created and the disappearance of posts from searches affected her work and self-confidence.

“It makes you feel like you’re not supported, that people are against you for what you do,” she says.