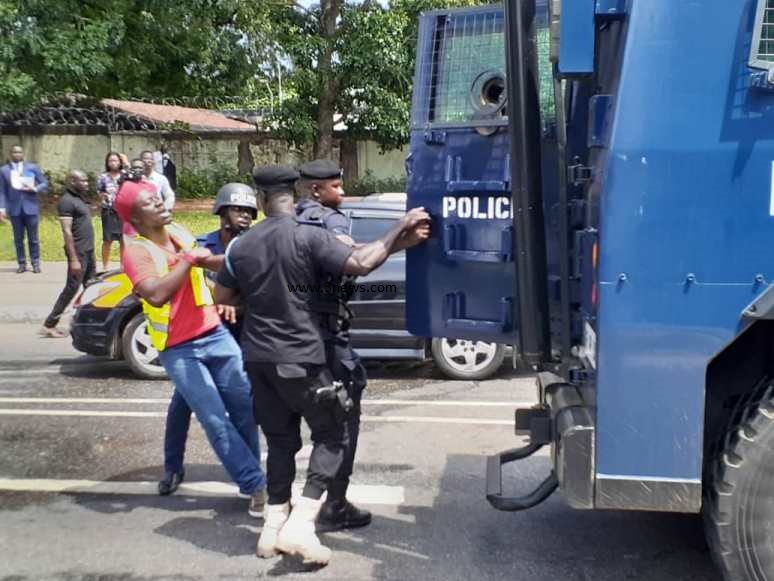 OccupyGhana is asking the Inspector General of Police, James Oppong-Boanuh, to apologise to law students who were brutalised on Monday for demonstrating to push for reforms in the country’s legal education.

Police personnel detailed to provide security for the protest used used brute force to prevent the law students from presenting a petition summing up their grievances to President Nana Akufo-Addo at the Jubilee House, claiming the students did not have permission though contrary evidence was provided.

Rubber bullets were fired and water sprayed on the protesters just few metres to the Jubilee House leading to injury of some of the students. About 13 of the students were arrested for allegedly insisting on their rights, but they were later released after being cautioned.

Critics have condemned the police high-handedness in the matter.

OccupyGhana in a statement Wednesday said the police had no justification whatsoever in exerting such brute force on the students who were only exercising their constitutional rights, noting the action by the police was against rule of law.

“This Police high-handedness and brutality against students exercising nothing more than their constitutional right to demonstrate and air out their grievances makes a mockery of the democracy we claim to respect, and we wish to unequivocally announce our disgust with that turn of events and to condemn same in no uncertain terms.”

The civil society group accordingly wants the newly confirmed IGP to apologise for the conduct of his personnel and also ensure those involved are brought to book.

“We demand, at the very least an apology from the recently-confirmed Inspector General of Police who bears ultimate responsibility for this egregious display of brutishness.

“We also demand that all Commanding Officers who directly supervised, sanctioned and called for these barbaric attacks on innocent protestors be punished in accordance with the law.

According to OccupyGhana, the police had no right to stop the protesters since they did not require any permission from the police before demonstrating, contrary to what the police sought to suggest in its press statement hours after the incident.

“We have closely studied the Police Statement on the matter which, to all intents and purposes, is a poor attempt to throw dust in the faces of Ghanaians concerning a true and accurate account of the day.”

“We repeat and remind the Police that the right to demonstrate is an inalienable right that requires absolutely no police approval or censure beyond notification.

“And no edifice, building or “zone” should exist which, having the benefit of public access roads, public traffic and public thoroughfare in whole or in part, cannot accept the presentation of petitions by unarmed and inoffensive demonstrators.

“No ground in this country is so sacred that it cannot tolerate the lawful exercise of unarmed students’ rights to demonstrate,” the Group explained.

OccupyGhana underscored the need for the police to desist from the abuse of power against the citizenry who act within their rights.

The group also chastised government for being mute over the fact that the protesting students who were being pelted with rubber bullets had to seek refuge from a foreign consulate in their own country.