US President Donald Trump has insisted he is not a racist after his Twitter attacks on four US congresswomen were widely condemned as racist.

Mr Trump had suggested the four women – all US citizens – “can leave” the US. Responding to the criticism, Mr Trump tweeted: “Those Tweets were NOT Racist. I don’t have a Racist bone in my body!” His remarks came as the US House of Representatives prepared to vote on a symbolic resolution condemning his previous comments. The measure – which would have no force of law – is expected to pass because Democrats have a majority in the House, with any Republican support likely to enhance its censure. Earlier, Representatives Alexandria Ocasio-Cortez, Ilhan Omar, Ayanna Pressley and Rashida Tlaib – the targets of Mr Trump’s attack – dismissed his remarks as a distraction. They urged the US people “not to take the bait” at a news conference on Monday. 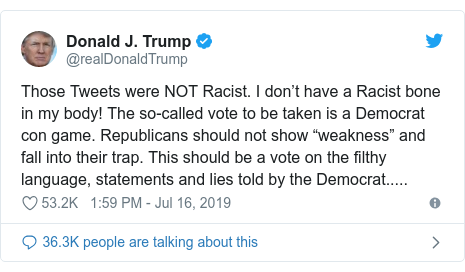 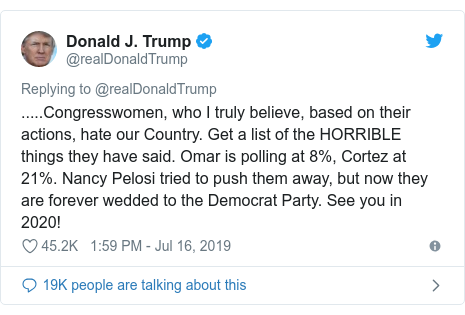 The president did not explicitly name the women in his initial Twitter tirade on Sunday, but the context made a clear link to the four Democratic congresswomen, who are known as The Squad. He sparked a furore after saying the women “originally came from countries whose governments are a complete and total catastrophe” and they should go home. Three of the women were born in the US and one, Ms Omar, was born in Somalia but came to the US as a child. Following the outcry, the four women told reporters they wanted to re-focus attention on to the president’s policies. “This is simply a disruption and a distraction from the callous chaos and corrupt culture of this administration, all the way down,” Ms Pressley said. Both Ms Omar and Ms Tlaib repeated their calls for Mr Trump to be impeached. On Tuesday, Mr Trump kept up his attack on the women, accusing them of saying “filthy and hate-laced things”.
READ ALSO:  Hosni Mubarak: Former Egyptian President dies aged 91
What did the congresswomen say? Ms Pressley dismissed the president’s efforts “to marginalise us and to silence us”. She added: “Our squad includes any person committed to building a more equitable and just world.” All four women insisted that healthcare, gun violence and, in particular, detentions of migrants on the US border with Mexico should be in focus. “The eyes of history are watching us,” said Ms Omar said, decrying the “mass deportation raids” and “human rights abuses at the border”. Ms Omar says Mr Trump’s “blatantly racist attack” on four women of colour was “the agenda of white nationalists”, adding that the president would like “nothing more than to divide our country”. Ms Tlaib called it “simply a continuation of his racist, xenophobic playbook”. “We remain focused on holding him accountable to the laws of this land,” she said. Analysis by Nick Bryant, North America Correspondent President Trump doubled down at the White House, verbally attacking these congresswomen of colour, and he tripled down on Twitter later on. He is using language that is well outside of the usual parameters of presidential discourse. The fact that he is escalating the issue shows he seems to be enjoying it and, for him, it serves a political purpose. He sees it as revving up the base. However, he risks alienating the moderate Republicans – some of whom already failed to back him in last year’s mid-term elections. What is the row about? On Friday, Ms Ocasio-Cortez, Ms Tlaib and Ms Pressley testified to a House committee about conditions in a migrant detention centre they had visited. Democrats have widely criticised the Trump administration’s approach to border control, saying they are holding migrants in inhumane conditions. Mr Trump insists the border is facing a crisis and has defended the actions of his border agents. His administration announced a new rule to take effect on 16 July, which denies asylum to anyone who crosses the southern border without having applied for protection in “at least one third country” on their way to the US. After their testimony, Mr Trump said conditions at the centre had had “great reviews”. He then posted his series of tweets about the women and Ms Omar, attacks he redoubled on Monday. “If you are not happy, if you are complaining all the time, you can leave,” he told a heated news conference outside the White House.
READ ALSO:  US Embassy wishes Ghanaian Muslims Eid Mubarak
How have Democrats and Republicans responded? Democrats have roundly condemned the president, and many were quick to say it was a racist attack. However, top Republicans have been less outspoken. Senate Majority Leader Mitch McConnell said he would answer questions on Tuesday. Treasury Secretary Steven Mnuchin said: “I don’t find them racist, the president just went on and clarified his comments.” He then changed the subject. Some, including Senator Lindsey Graham, turned the topic back on to the politics of the four women, who are seen to be progressive. He told Fox News they are communists and anti-America. US Senator and former presidential candidate Mitt Romney called Mr Trump’s remarks “destructive, demeaning, and disunifying”. But when a reporter asked him if they were racist, he walked away. 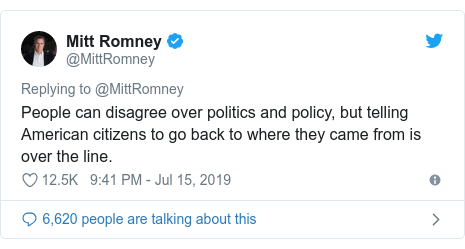 Lower-ranking members of the Republican Party were, however, more direct. Tim Scott, the only African-American Republican in the Senate, called the president’s words “racially offensive”. Republican Congressman Will Hurd, who is also African American, described the comments as “racist and xenophobic”. Democratic House Speaker Nancy Pelosi has, meanwhile, announced a resolution in the House to condemn the attack. She has urged Republicans to back it. Her colleague Chuck Schumer said he would introduce a similar motion in the Senate. “We’ll see how many Republicans sign on,” he tweeted. How have world leaders reacted? The leaders of several US allies have come out against the president. New Zealand’s Prime Minister Jacinda Ardern said she “completely and utterly” disagreed with Mr Trump, while Canada’s Prime Minister Justin Trudeau similarly denounced the comments. “That is not how we do things in Canada. A Canadian is a Canadian is a Canadian,” he said at a press conference. British Prime Minister Theresa May said the remarks were “completely unacceptable”. Source: BBC]]>
READ ALSO:  President Trump: 'I am not a racist'