Hundreds of Hurricane Dorian survivors have fled the Bahamas as thousands more anxiously await evacuation from the devastated islands.

The hurricane tore through the islands earlier this week, leaving a trail of destruction and a humanitarian crisis in its wake. The official death toll rose to 43 on Friday, but is expected to increase further, officials told local media. With aid efforts under way, many survivors are scrambling to evacuate. On Friday, crowds desperate to leave amassed in their thousands at ports in Great Abaco and Grand Bahama, two of the worst-hit islands. Frustrations mounted as survivors, carrying what few possessions they had left, complained of “chaotic” and slow evacuations. As Gee Rolle, 44, waited for a private boat with his wife, he criticised the government, telling the Associated Press “only animals can live here“. Bahamian Prime Minister Hubert Minnis, speaking to survivors at the port in Abaco, called for calm and promised more free transport. Later on Friday, Mr Minnis confirmed the death toll had risen to 43, up from 30. In a statement he said: “The loss of life we are experiencing is catastrophic and devastating.” Now a category one hurricane, Dorian is currently churning along the Atlantic coast of North America, towards Nova Scotia. Earlier on Friday, hundreds who refused to evacuate Ocracoke Island in North Carolina were stranded when the hurricane made landfall. What’s happening with evacuations in the Bahamas? On Friday, many of the evacuations were carried out by private boats and planes, as the Bahamian government awaited the arrival of other transport. Helicopters and boats had been deployed but could be delayed by severe flooding, the Bahamian Health Ministry said. Around 250 evacuees left Abaco on a boat bound for the Bahamian capital, Nassau. National Voice of the Bahamas radio reported that another boat with hundreds aboard was on its way. A further 200 people were evacuated from Abaco on Bahamasair flights. In Grand Bahama, a large cruise ship offering free passage to Florida allowed passengers with permission to enter the US to board. One survivor, 75-year-old Firstina Swain, told Reuters news agency the “people of Abaco need to get out” because “there are too many bodies”. “Nobody can help anybody in Abaco, there’s no place safe, everything is destroyed,” she said. According to the UN, at least 70,000 Bahamians are in need of immediate humanitarian relief after their homes were destroyed by the hurricane. The islands have a population of about 400,000. The PM and his government have been criticised for the speed of their response to the humanitarian crisis. Chaotic air traffic control is said to be hampering relief and evacuations operations, the Miami Herald reports. Where is Hurricane Dorian now? At 23:00 local time on Friday (03:00 GMT Saturday) Dorian was 200 miles (325km) south of Nantucket, Massachusetts, moving south-east at a speed of 25mph (41 km/h). The National Hurricane Center (NHC) said Dorian was moving towards Nova Scotia “in a hurry”.
READ ALSO:  Hurricane Fred hits Cape Verde islands 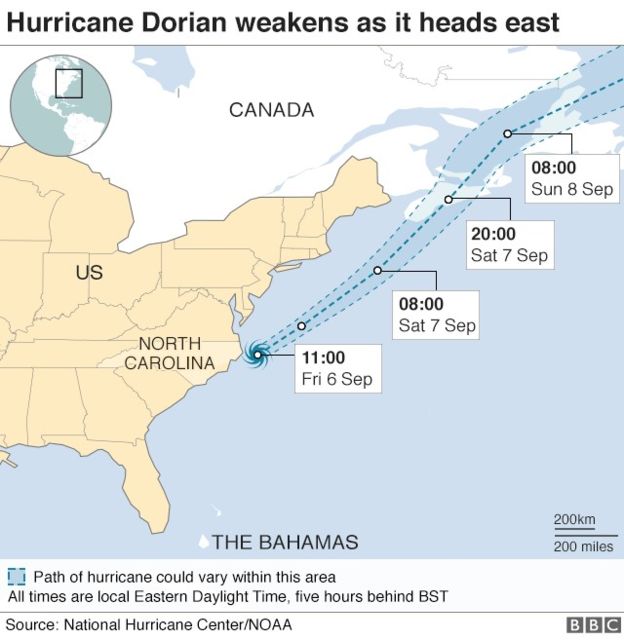 “On the forecast track, the centre of Dorian should pass to the southeast of extreme southeastern New England Saturday morning, and then across Nova Scotia late Saturday,” the NHC said. Forecasters said 10in (25 cm) of rain had fallen between Charleston in South Carolina and Wilmington, 170 miles away in North Carolina. What is the damage to the Bahamas? Dorian hit the Bahamas as a category five hurricane with winds reaching 185mph (298km/h). It matched the highest ever wind speed recorded at landfall, and stayed over affected areas for two days. Officials say hundreds, possibly thousands, are still missing and the final death toll could be “staggering”. The International Red Cross fears 45% of homes on Grand Bahama and the Abacos – some 13,000 properties – were severely damaged or destroyed. Parts of the Bahamas received up to 35in (89cm) of rain, leaving vast areas flooded. The island of Great Abaco is virtually uninhabitable, with bodies piled up, no water, power or food, and militias formed to prevent looting, local media report. Aerial images over the Abacos showed mile upon mile of destruction, with roofs torn off, scattered debris, overturned cars, shipping containers and boats, and high water levels. Source: BBC]]>

Alibaba to launch in Ghana