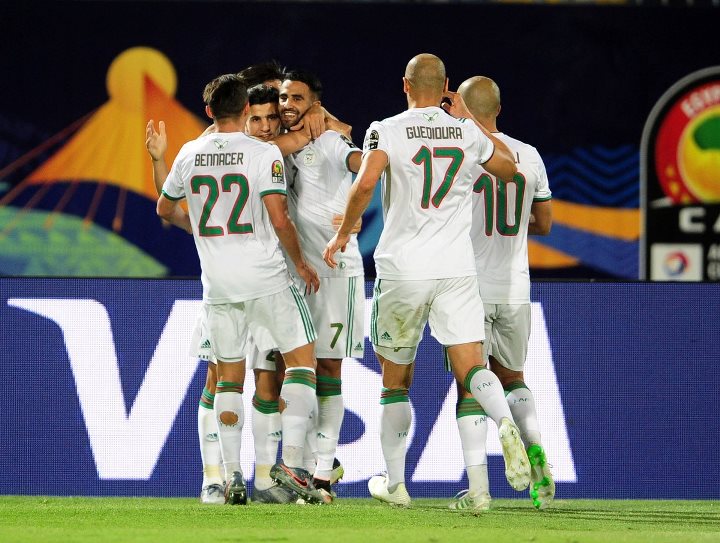 Algeria made a remarkable qualification to the quarter-finals of the 2019 Africa Cup of Nations after beating Guinea 3-0 in the Round of 16 on Sunday.

Not only did that make them bear the torch of North African hopes in the knock-out stage, aside Tunisia, but the Desert Foxes also became the only side yet to concede at the tournament.

Goals from Youcef Belaili, Riyad Mahrez and Adam Ounas were enough to sink the Syli Nationale and broke the jinx of a third-placed team pulling a shocker over group toppers.

Before Sunday’s Round of 16 tie played at 30 June Stadium, North African steelness have been broken by sub-Saharan opposition despite the northerners finishing superior at the group stage.

Without dropping points, Egypt topped Group A but fell to third-placed South Africa in the fourth Round of 16 game played on Saturday.

A day earlier, Group D winners Morocco had suffered ignominy in the hands of  10-man Benin, who placed third in their group.

But Algeria made their intentions clear from the start and in the 24th minute broke the deadlock.

Though the Guineans held their own against the 1990 champions into the break, the Foxes returned charged to score two more goals.

They are the only side to have scored more goals at the tournament.

They started with a 2-0 win over Kenya, beat Senegal 1-0 and then ended the group campaign with a 3-0 drubbing of Tanzania.

They have really donned the favourites tag they had prior to the same tournament in 2015.

Algeria’s quarter-final clash will be against another West African side – Mali or La Cote d’Ivoire.