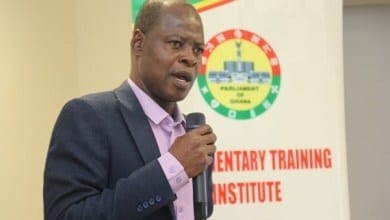 Chairman of the Civil Society Platform on Oil and Gas, Dr Steve Manteaw, has accused the government of under-reporting 2019 revenue generated from gold royalties to make a case for the Agayapa Royalties agreement.

The CSO have vehemently rejected the Agyapa deal because in their view, it is not in the best interest of Ghana.

Speaking at a press conference in Accra on Tuesday September  8, Dr Manteaw said, “At our last meeting with the Ministry, some slides containing some data were presented. However, when we requested for copies, those particular slides of interest to us were omitted either deliberately or inadvertently.

“The interesting thing for citizens to appreciate is that through government’s communication it is evident that it is either not paying attention to the revenue flows in the sector, or deliberately undervaluing the assets for unknown reasons.

Agyapa deal: Be proactive – CSOs to Special Prosecutor, other bodies

“When a direct question was posed to the Deputy Minister of Finance on the amount of royalties received from gold in 2019, he said Ghana received about ¢650 million ($123 million).

“The truth is that Ghana received ¢1.06 billion ($200 million) from the big companies under the Chamber of Mines alone. Government has data on the other receipts, yet it decided to under-report the numbers.

“Again, in our meeting with the Finance Ministry, we were given half-year receipts for 2019 of $72 million (¢366 million). The under-reporting of the 2019 revenue which is the most significant period for revenue projection and emphasis on old royalty numbers is intriguing,” Dr Manteaw added.

Meanwhile, Finance Minister, Ken Ofori-Atta has brought finality on whether or not the Agyapa Royalties agreement will be suspended following the dissenting views expressed so far on the agreement.

He said the agreement will not be cancelled because the government is convinced it is good for Ghana.

He made the revelation on Joy FM’s News file Saturday, September 5.

He said on the show that “the issue of transparency, the valuation, tax haven and all of those little things that that people need to know,  I pray that we have done justice.”

Asked whether the government can publish a 30-year cash flow projections based on the Agyapa module juxtaposed side by side with inflows from the royalties from the current arrangement over the same 30-year period, he answered: “That is welcomed. There is nothing that we cannot or should not do and really in the end after three, four, five years it is all projections.

Asked again whether the government will pause the deal in the face of some of the dissenting views expressed on it, he answered: “No we are not. I think this is a good transaction. I think the issues that have been raised we have put light on them. This is an incredible opportunity, the highest gold prices in the world.”

Based on the agreement, Agyapa Royalties Limited (ARL) will trade shares on the Ghana Stock Exchange and the London Stock Exchange for private people to buy. But the Mineral Income Investment Fund(MIIF) will remain the majority shareholder.

The flagbearer of the National Democratic Congress (NDC), John Dramani Mahama ahas also questioned the deal and said he will not recognize it in case he wins this year’s elections.

Agyapa deal: Be proactive – CSOs to Special Prosecutor, other bodies

Ken Agyapong, doctor fail to show up in court

Ken Agyapong, doctor fail to show up in court