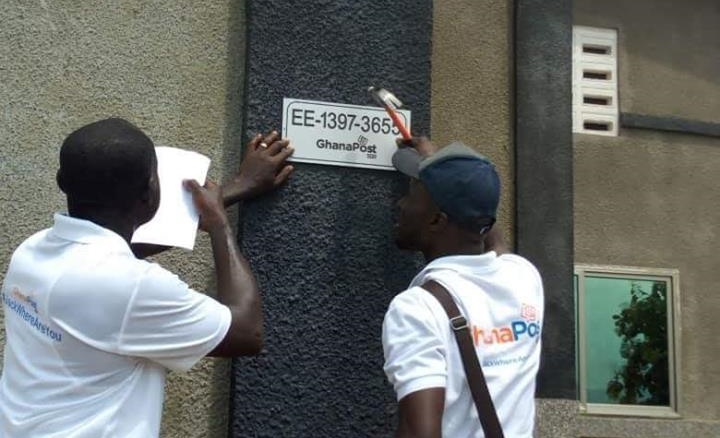 Government is set to deploy 12,750 Nation Builders Corps (NABCo) personnel across the country to generate digital address for every house and property, and emboss on each of them, a number plate. The house number, digital address of every household, as well as the name of the street on which the property is located, will be embossed on each of the plates to be fixed on every building in Ghana for free. Currently, Ghana Post charges 50 cedis to tag residential buildings and 100 cedis for commercial ones with the GhanaPost Digital Address plates. About four million households across the country are expected to be tagged in the new exercise that is set to begin from August 8 which the government has set aside as the Digital Address Day, also known as the “8:8 Day”. Under the government’s National Addressing System, the exercise is set to be completed within six weeks. Ahead of the start date, the Vice President Dr Alhaji Mahamudu Bawumia on Saturday met with the various stakeholders in the project. The including officials from the various MMDAs, Ministry of Local Government, Ministry of Special Development Initiatives and NABCo, Ghana Post, Land Commission, Ghana Statistical Service, Ghana Post and Spatial Planning among others. “At the end of the project, what we are gonna have is four million households are going to have a tag on them that has a house number, a street name, a digital address,” Chief Executive of NABCo, Dr Ibrahim Anyars told 3news after the meeting. Of what benefit is the project? Dr Anyars lauded the project, indicating it will ensure that emergency services were delivered to the doorsteps of the people on time. “This is very good for our country in terms of being able to deliver in terms of emergency services to the point of need, in terms of being able to be identified properly if you require some support with financial services and all the other benefit that come in terms of our own security. “If you look at your household, if there was an emergency required because of some kind of security concern, you could easily be identified by the police or the emergency services and this can only a good thing for the householders and so we’re counting on everyone to support this,” he said.

READ ALSO:  E-levy: SC dismisses Vormawor contempt case against GRA boss, charges him ¢10k
Who pays for the number plate? Though he said the project will come at a cost to the government, he was unable to say how much will be involved, but indicated that the use of NABCo personnel will not come bring additional burden on government as they are already being paid under the programme. Asked whether the generation of the digital address and the embossment of the number plates will come at a cost to the property owners, he answered in the negative. “This will come at a cost, but this is going to be delivered free to the households, and I emphasise that every household that is going to be tagged with the plate that has the house number, the street name and the digital address is going to be done free of charge to the household. “No householder should pay” he stressed. Dr Anyars also said no personnel should be paid for the generation of the digital address or for any protocol service with the view to having fast track service as “every household is going to receive the plate which is going to be paid for by the government”. On the issue of households without house numbers, the chief executive of NABCo said the Spatial Planning Authority “have systems that can now auto generate even house numbers” He said the personnel will rely on existing database of the various MMDAs. Enough preparation He said the relevant authorities and the various stakeholders at the various districts and regions have all been met and briefed on the project. He said the NABCo personnel to be deployed will be supervised in collaboration with the physical planning department of the MMDAs. Dr Anyars said they would work to make sure that by the end of this year every house would have a tag “identifying it in the same sense that we want individuals nationwide to have a national ID system; properties equally should have”.
READ ALSO:  3News Highlights - Thursday, February 17
Distribution of personnel Each District will have a 50 personnel, which will translate into 25 teams per district  and 6,350 teams across the country daily. “We could have done this in two weeks but to avoid mistakes and because this is human-centred, we slow it down to a period of six weeks,” Dr Anyars said. By Stephen Kwabena Effah|3news.com|Ghana]]>

I still made it in life – Delay responds to KiDi’s...