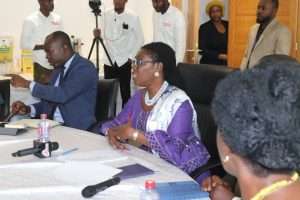 With enterprises increasingly under threat of cyber-attacks and malicious insiders, business entities access sensitive data and critical system, the introduction of the PKI system has been considered as timely.

Over the years, there have been a few forms of authentication, which have been developed to safeguard critical and sensitive data.

Telcos agree to stop upfront deduction, but will pass on 9% CST

The most basic method of encryption is a single password sign-on. While many businesses end up using these kinds of verifications, they are inadequate due to the relatively simple ways in which they can be defeated. Passwords are a great place to start, but they are rife with shortcomings that prevent them from protecting information all on their own.

Speaking at a ceremony in Accra recently to announce the move, Ghana’s Communications Minister Ursula Owusu Ekuful said the PKI system “is an additional layer of authentication which secures our digital transactions. So, it is as if there is a key broken into two, the public key is given out but before anyone can read your document or open the document they need the private key.

“So, if you are not the one who actually issue that document it would be impossible for anyone to open it and to read it.”

She added, “So it adds another layer of security to the electronic transactions that we engage in. Increasingly most of our lives are going digital, most of the interactions that we are having, we are having them online, filing forms, applications, receiving information, paying for goods and services, receiving payments for goods and services—all of that is being done on electronic platforms.

“There has to be some trust built into the system because once people have an idea that it is a system that is opened to hacking and it is trustworthy they would not use it [and] it defeats the purpose we were making all that investment. So this is another layer of security that we were adding to all electronic transactions.”

The PKI system would be implemented by the Ministry of Communications through the E-transform Project and NITA.

Telcos agree to stop upfront deduction, but will pass on 9% CST