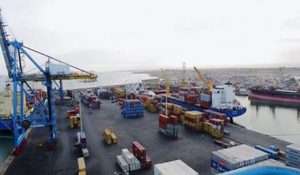 Member of Parliament for the Adaklu Constituency in the Volta Region, Kwame Agbodza, has alleged government’s plans to review import duties is nothing but a ploy to gain political favour from the public in the 2020 general elections.

President Akufo-Addo announced over the last weekend while addressing a townhall meeting of Ghanaians resident in Worcester, Massachusetts, in the United States of America, that his government will soon review import duties.

“We have realised from the studies we have done that our ports are not competitive, and the import regime in our country is far too high. We are dealing with it, and, very soon, the measures that the government will roll out will become known to all of you. I am not talking next year, or in 6 months’ time, I am talking very, very soon,” the President said.

But the Adaklu MP, who spoke on TV3’s New Day Monday, expressed skepticism about the intentions of the government, arguing the challenges importers and exporters are facing in the country are beyond just the high import duties.

He said it has more to do with the value of the cedi in the face of other foreign trading currencies.

“We knew the depreciation of the cedi has actually made life difficult for importers and exporters, no two ways about that”, he observed.

According to him, the plight of importers became worse off when the government decoupled the 5% NHIS/GetFund levy component from the VAT.

He explained that, that move meant adding 5% to the cost of doing business at the port.

Mr. Agbodza claimed the government has taken a U-turn on the tax regime because of the fear of elections.

“But now elections are getting closer, Abossey Okai people are warming up to the reality that the they were deceived, the importers in Kumasi have been on the streets for a couple of reasons, you and I who actually patronise imported goods know today the cost of products that are imported have gone through the roof”, he claimed.

He observed that the decision to review the import duties is “two years late”, noting that Ghanaians and businesses have suffered the consequences already.

“It’s good he looks at it but if it’s for electoral purposes the damage has already been done”, he said.