The Ghana Integrity Initiative (GII) is demanding an independent investigation into bribery allegations against former Managing Director of Tema Oil Refinery (TOR), Asante Berko by the US Securities and Exchange Commission.

Then working as an employee of US-based lender, lender, Goldman Sachs, the accused is said to have arranged the funneling of $2.5 million by a Turkish energy company to bribe various Government Officials responsible for approving a Power Plant Project in Ghana.

“The Energy Company transferred at least $2.5 million of the planned $3 million to $4.5 million to the Intermediary Company, all or most of which was used to bribe Ghanaian Government Officials,” the SEC said in a statement.

Mr. Berko, a 46-year-old corporate finance and investment expert who was appointed in late January this year, has since resigned from TOR after denying the allegations. President of Ghana, Nana Akufo-Addo on April 15, 2020 accepted his resignation and wished him well.

But the anti-corruption institution is not satisfied with the resignation and want more action taken.

In an open letter to Ghana’s president, the Ghana Integrity Initiative said it was “extremely concern” about the allegations of bribery involving Mr. Asante Berko.

“Mr. President, GII is not oblivious to the fact that you are preoccupied with the fight against COVID-19, the ruthless pandemic. However, we want to respectfully bring Government’s attention to the fact that, if conscious effort is not made, there is the high tendency and risk of Government’s attention being shifted from addressing anti-corruption issues resulting in these allegations being swept under the carpet.”

Insisting that public officials demonstrate the highest standards of integrity in the performance of their duties, GII is demanding two things from the presidency:

It pointed out to the president that the image of the country and that of his government is at stake with regards to how such corruption allegations are handled.

The institution however commended the President for the “urgency and importance” he attached to the Airbus saga, which some persons in the previous administration were alleged to have received bribes to award contracts in the purchase of three aircraft.

It moreover reminded the president, “the swift action taken in referring the matter to the appropriate state institution for investigations and request that same alacrity is given to this matter.”

Lifting lockdown: Akufo-Addo was not influenced by fear or panic – Oppong Nkrumah 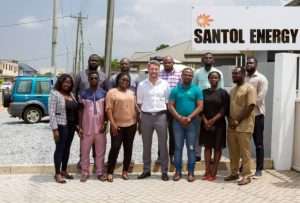 Lifting lockdown: Akufo-Addo was not influenced by fear or panic – Oppong Nkrumah