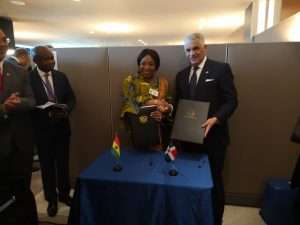 Ghana and the Dominican Republic have signed an agreement to strengthen bilateral and economic cooperation between the two nations.

This happened on the sidelines of the on-going 74th UN General Assembly in New York.

Tourism, investment and trade as well as supporting each other at the multilateral levels were some of the issues that came up when Ghana’s Minister for Foreign Affairs and Regional Integration, Madam Shirley Ayorkor Botchwey met with her Dominican counterpart, Mr. Miguel Octavio Vargas Maldonado.

“Accra and Santo Domingo are far from each other due to the Atlantic but we share things in common on several fronts. We share same ancestry due to the slave trade, while we produce cocoa, you also produce coffee and so there is the need for us to collaborate to improve the livelihoods of our people,” Madam Ayorkor Botchwey.

KCCR gets support from Newmont to procure PCR test machines

The year of return celebration also came up high during the meeting, informing her counterpart of the visit of President Akufo-Addo to some Caribbean nations including Jamaica.

On his part, Mr. Maldonado noted that tourism is one of the areas that the two countries can work together to bolster economic cooperation.

Meanwhile, he has also agreed in principle the call by Ghana to support reforms at the UN to give a permanent seat to Africa at the UN Security Council.

Dominica Republic is a multi-racial country with white, black and East Asians including Chinese and Japanese. Spanish is the official language of the country with a population of 10.7 million, the second largest Caribbean Island after Cuba. It is the most visited destination by tourists in the Caribbean.

KCCR gets support from Newmont to procure PCR test machines

Police urges public to disregard call to demonstrate against US