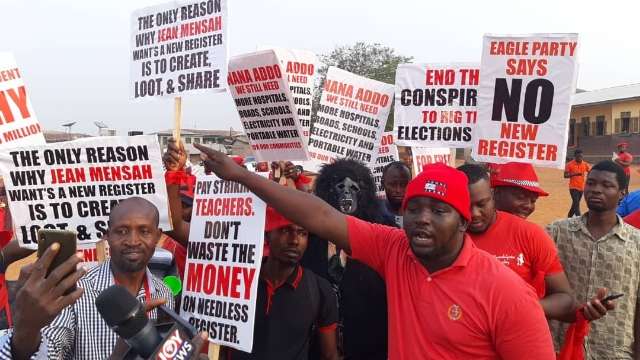 Dispute resolution service provider, Gamey and Co ADR Centre has offered to mediate the impasse arising out of the controversial decision by the Electoral Commission to compile a new voters’ register for the December general elections.

The decision to compile a new voters’ register from April 18 has triggered stiff opposition from some political parties and a wave of mammoth protests in parts of the country, which critics say is causing seeming political tension.

Voter registration yet to start in all centres in Odododiodio, applicants agitated

According Gamey and Co, the current atmosphere, if not well handled, could disturb the peace and security in the country, hence underscored the need to reach amicable settlement between the EC and the opposing parties.

“In this regard, the Gamey & Co ADR Centre has offered to conduct a Facilitated Mediation which would help the Electoral Commission and the political parties concerned to reach an agreement,” a statement issued Monday by the firm said.

It has proposed February 24 to hold what it termed as pre-mediation meeting with the respective stakeholders and a plenary session the next day.

The firms assured that it will use its longstanding experience and expertise, to get the two sides to effectively address their interests and concerns for a solution that should be mutually beneficial to them and the entire nation.

“We offer the mediation as our corporate social responsibility to mother Ghana, and trust that the Electoral Commission and the concerned parties, who are interested in a peaceful electoral process, would accept the mediation intervention.

It added: “We have high confidence in the two sides to make it happen”.

Meanwhile, the statement did not say whether the firm has informed the EC and the political parties involved of the plan to resolve the impasse between them.

The Electoral Commission on Tuesday, June 30 commenced a nationwide exercise to register eligible Ghanaians for the compilation of a...

Voter registration yet to start in all centres in Odododiodio, applicants agitated

Voter registration is yet to commence at polling centres within the Odododiodio constituency in Accra, five hours after the nationwide...