Game of Thrones: A recap of story so far ahead of April 14 premier

Here’s a quick recap of what’s been happening on Game of Thrones (GOT) and what to remember for season 8, character by character as the April 14 premier date gets closer.

In Kingslanding, Cersei and Jamie may no longer be having incestuous sex, at least for a while. Cersei pretended to join Jon and Daenerys to fight the night king, but changed the plan once they left Kingslanding.

Jamie, gullible as he is, is disappointed and has ridden off possibly to find the dragon queen?

Arya and Sansa have masterfully killed off Little finger and the Stark sisters are together again watching over their home till Jon returns.

Bran and Samwell Tarly compare notes and visions to discover that Jon Snow is infact a Targaryen and in fact the legitimate heir to the iron throne.

Brienne and Podrick are safe and sound as well, that’s important because Podrick has a very specific skill set that may come in handy in the new post Night King world if they win the war (winky face).

Meanwhile, in other incestuous news, Jon bent the knee to Daenerys in more ways than one, on the ship to Winterfell.

Tyrion, hand of Queen Daenerys, seems displeased by this as he lurks in the shadows outside Jon’s room where Daenerys has gone to receive his fealty and… Oath.

Misandei and Grey Worm did ‘many things’ before he rode off to fight the Lannisters. She’s worried about him, but he says he’ll be back so we have no fears.

The Dragon queen has only two dragons left since the knight king stuck a javelin through Viserion.

The wall has fallen. The Knight king took his newly acquired dragon out for a spin on the wall.

White walkers are running past the wall led by their king and his dragon. This is not good.

There’s no way of knowing how or if Tormund Giantsbane and Berric Dondarrion survive. We are all doomed.

Season 8 will be the most stressful season yet. Our faves will die, our watch will end.

But, let’s enjoy it while it lasts!

Nana Adwoa  is a legal practitioner, a writer and a movie fanatic. 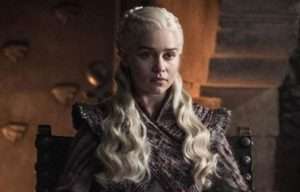 Game Of Thrones Season 8: Worth the wait?