Retrenched workers of AngloGold Ashanti (AGA) are demanding the immediate release of their heritage fund from government.

The former workers staged a demonstration to protest delay in payment, almost four years after the World Bank released the funds to government.

“We are demonstrating against the President, Nana Akufo-Addo, for refusing to release our heritage fund for those of us who were retrenched in 2013 and 2014,” Spokesperson for the former AGA workers, Isaac Asiedu, stated.

“A lot of meetings have been held between the presidency, management of AGA, and us but the money has not been paid despite assurances from the President since 2018.”

AngloGold Ashanti gets greenlight to sell remaining mines in SA

In November 2014, AngloGold Ashanti announced the shutdown of its Obuasi mine.

The mine was placed on limited operations.

Over 6,000 employees of the company were retrenched and few given contracts to oversee the limited operations.

After some consultations and negotiations with government, the Obuasi mine resumed full operations in 2019.

The retrenched workers of AGA claimed since the company was shut down in 2014, they are to be paid their share of the company’s heritage fund.

The fund was created when the mine was established over a century ago with a condition that monies accrued will be distributed to workers whose time the company collapses.

The aggrieved former AGA workers claimed the money was released by World Bank in 2016 but government is refusing to distribute it to them.

“We will not sit unconcerned for government to take us for a ride. After this demonstration, we intend petitioning the World Bank to inform them about government failure to release the money to us,” Mr Asiedu threatened. 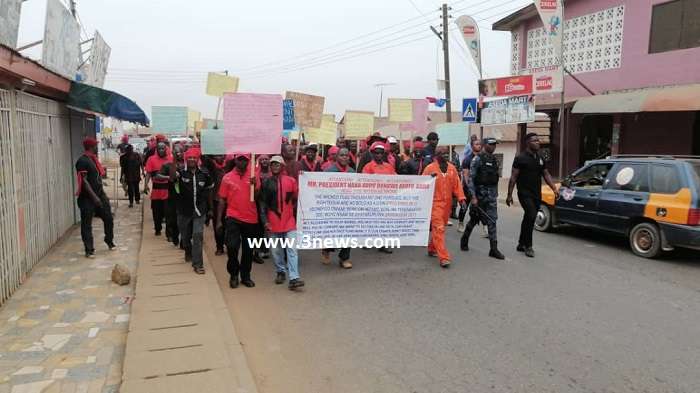 The group marched through some principal streets of Obuasi clad in red and black attires, holding placards with inscriptions calling on the President to immediately release the Heritage fund to its beneficiaries.

AngloGold Ashanti gets greenlight to sell remaining mines in SA