Fishermen at Sekondi in the Western Region believe the intent of the closed season for fishing could only be achieved if it covered trawler operators as well.

The closed season as explained by government and fisheries commission over the period is to allow respite to replenish the depleting fish stock in Ghana’s sea.

But the fishermen say the activities of trawlers among other unprofessional practices damage fingerlings, hence the need that they are also banned.

Government of Ghana spearheaded by the ministry of Fisheries and Aquaculture Development (MOFAD) proposed a close season in last year, 2018 but fishermen across board and some industry players objected to the idea.

Excessive consumption of ‘koobi’ can cause heart-related diseases – Cardiologist

Among other reasons to the objection, the fishermen intimated that government did not seek their opinion on the scheduled date.

In-between the period there have been stakeholder engagements with the sector ministry and Fisheries Commission and all those concerned. They therefore resorted to effect the close season on May 15 to June 15 this year.

However, a section of the fisher folks including Sekondi inshore association are worried over what they termed as “government’s discriminatory decision” to exempt trawlers during the season.

Speaking on behalf of the Sekondi Inshore association during a town hall meeting at the Bosomtwe Sam Fishing Harbour at Sekondi organized by MOFAD, 2005 best fisherman Andrews Tetteh called on the ministry to emulate a country like Philippines as their close season affects all forms of fishing in the country including trawlers.

“The trawlers run over the small fish so they don’t live to grow for harvest. The trawler operators dump dead fish back to the sea which drive away the fish to go very far so they should be part too because close season is close season”, he asserted.

Mr. Tetteh also alleged the ministry is in a fix to include trawler fishing because many of the vessels are owned by politicians. “So-called ministers and MPs own those trawlers that is why they could not include the trawlers”

He challenged the ministry to produce records of registered trawlers if they would be any fisherman in Ghana in the list.

“If she likes she should bring the report out to ascertain the owners of the trawlers,” he dared government.

But the sector minister, Elizabeth Afoley Quaye maintained the close season is to revamp the industry for the good of the country.

“We won’t say things that will make you happy now rather we are telling you what will help your business in the future. If we gave you outboard motors and the likes and yet your catch is lean it won’t be profitable to you so sacrifice now and enjoy later”, she urged.

She explained fishing is categorized and each operates at different levels on the sea thus the close season cannot be generalized.

“From 1st August to 30th September the trawlers will also have their close season for two months”. She was of the view that the absence of the trawlers during that time will mean a bumper harvest for the rest.

The minister however promised that the ministry will be stern in regulating the activities of trawler fishing to ensure they apply best practices.

Excessive consumption of ‘koobi’ can cause heart-related diseases – Cardiologist 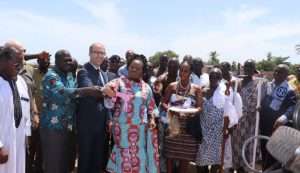