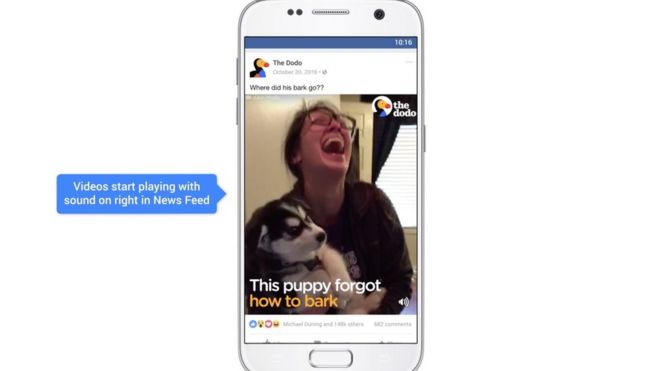 Much of Facebook’s recent growth can be attributed to the spread of video on its network – and the company told investors recently it planned to aggressively monetise that success.

Today, it announced some ideas to get things moving – starting with a change many users may not appreciate. Videos have autoplayed on Facebook’s News Feed for some time, leading to a curious rise of “silent movies” as publishers adapted to knowing that the majority of viewers would be watching, but not listening, to their work. But between now and the end of the year Facebook’s News Feed will be enabling sound on your News Feed by default, a move the company has been testing out on a limited number of users for a short while. The firm said it had received “positive feedback” so far. “With this update, sound fades in and out as you scroll through videos in News Feed, bringing those videos to life,” the company explained in a blog post on Tuesday. “As people watch more video on phones, they’ve come to expect sound when the volume on their device is turned on.” Thankfully – for those who don’t want videos to suddenly play out on the bus – if your phone is set to be completely silent, Facebook will not override that. You can also turn it off completely in the Facebook app’s settings. But data shows us that when something is thrust upon users as the default, they will mostly stick to it. It will likely change the style of many of the videos we see on the network. For some time now, publishers have realised that because viewers were probably not listening to clips, but just watching them, they needed to add subtitles as a way to draw people in. Publishers may well relish the chance to do away with that legwork. Subtitling is time-consuming and costly. Facebook’s analytics tools go into great detail about how videos are performing, and so expect companies to be watching closely to see if they can now give up on subtitles.
READ ALSO:  Ghanaian invents cheaper way of building houses
Accessibility hit If that’s the case, it could potentially be terrible news for accessibility. One welcome side effect of viewing habits on Facebook has been that impaired viewers were benefitting from subtitling becoming good business sense as well as just the right thing to do for accessibility. Earlier this week in the UK, disability groups cheered the arrival of a new amendment to the Digital Economy Bill that would push broadcasters to improve subtitling for on-demand content. It is intended to bring existing laws over TV subtitling into the modern age – giving media regulator Ofcom the ability to set quotas and minimum standards for subtitling online. But that, as it stands, would not apply to Facebook – and even if it did, the majority of video posted to Facebook originates overseas. There is, however, potential good news on the horizon: Facebook has also been tentatively rolling out voice recognition software designed to automatically transcribe clips and add subtitles. But, I’m yet to see software truly up to that massive task. Today’s announcement by Facebook was just one part of several plans the company shared about its video ambitions. Vertical videos will be displayed in full, and therefore appear larger in your feed. And you’ll also be able to carry on watching a video while scrolling down your feed – a feature already found in YouTube’s app. The plans also include new efforts to reach viewers through their televisions. The company is launching an app on Apple TV, Amazon Fire TV and Samsung Smart TV with more platforms to come, it said. Source: BBC]]>
READ ALSO:  Show of power: Minister 'orders' arrest of late Mahama's brother