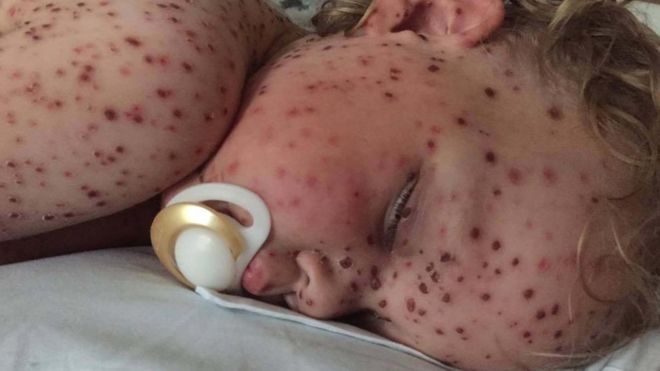 Facebook has deleted two accounts that used stolen photographs of a sick child to falsely claim he had cancer.

It follows complaints by the three-year-old’s mother that the images had been used as part of a scam. They dated from last year when the boy had a bad case of chickenpox. The posts claimed Facebook would donate money for surgery if users “liked” them or left comments. One security expert warned that users who did so had put themselves at risk. More than a million people had engaged with one of the messages since it was posted at the start of the month.

Sarah Allen, from St Neots, Cambridgeshire, believes the Facebook accounts had sourced the photos from online news stories published about her son’s chickenpox in August 2016. Jasper Allen’s illness drew attention because of its severity and the fact that his mother had called on the government to make the chickenpox vaccine free for all. “We were warned people might take his pictures… because if you Google chickenpox his pictures are there,” Mrs Allen told the BBC. “So, we were well aware that might happen, but not in this respect, to say he had cancer.” She added that some friends had contacted her after seeing the posts to ask if her son indeed had cancer. Mrs Allen said she repeatedly messaged Facebook to complain about copyright infringement and was told on 10 February that one of the accounts had been removed for breaching the site’s rules. However, she said, it was back online within 24 hours, without explanation. It was only after the media, including the BBC, covered the affair that Facebook instructed its complaints team to revisit the case. The US-based company initially only removed the posts featuring Jasper before it decided to close the associated accounts completely. The accounts had also featured posts with identical text that showed images of other children. One example featured a bearded youth – despite the words referring to a “little baby [that] has cancer”. Other posts from the accounts showed images of children in hospital claiming that viewers would experience years of bad luck if they scrolled down without liking and sharing. One security blogger said it appeared to be have been a case of “link farming”, in which scammers seek to make people interact with a Facebook post so they can either direct further messages to them or sell on the profile and all its contacts. “There are a lot of scams that use these kind of emotional images – oftentimes it’s done to make money,” Graham Cluley explained. “They may later post something that claims you’ve won a prize and try and get you to enter your mobile phone number and then sign you up for a premium rate service, or ask for other personal information. “The problem is that people just believe things that are posted online, and they need to be a lot more careful about what they like and share.” Source: BBC]]>
READ ALSO:  Akufo-Addo calls for reforms to make the UN stronger