Eritrea’s President Isaias Afwerki has arrived in Addis Ababa for a three-day state visit, as part of an unprecedented softening of tensions between his country and Ethiopia.

Saturday’s visit by Afwerki, his first in 20 years, comes a week after Ethiopia’s Prime Minister Abiy Ahmed made a landmark visit to Eritrea’s capital, Asmara.

An agreement signed in Asmara by the two Horn of Africa nations on Monday formally ended a conflict that has been ongoing for more than two decades.

The newly-appointed reformist Abiy first instigated the peace overtures and restoration of relations in April. Al Jazeera’s Catherine Soi, reporting from Nairobi in neighbouring Kenya, stressed the important value of the visit by Afwerki, who has been president of Eritrea since its independence in 1993. “Things have progressed very quickly,” Soi reported. “Many observers have been caught by surprise,” she said. “It all started when Prime Minister Abiy reached out to the Eritrean president back in April and agreed to abide by the UN ruling on the disputed territories that have been the cause of this 20-year conflict. “This visit by President Afwerki really cements this thawing of relations. We expect a lot of Ethiopians to receive the president. It’s very good news all around.” As part of the thawing of relations, Ethiopian Airlines is due to resume commercial flights to Asmara on Wednesday. 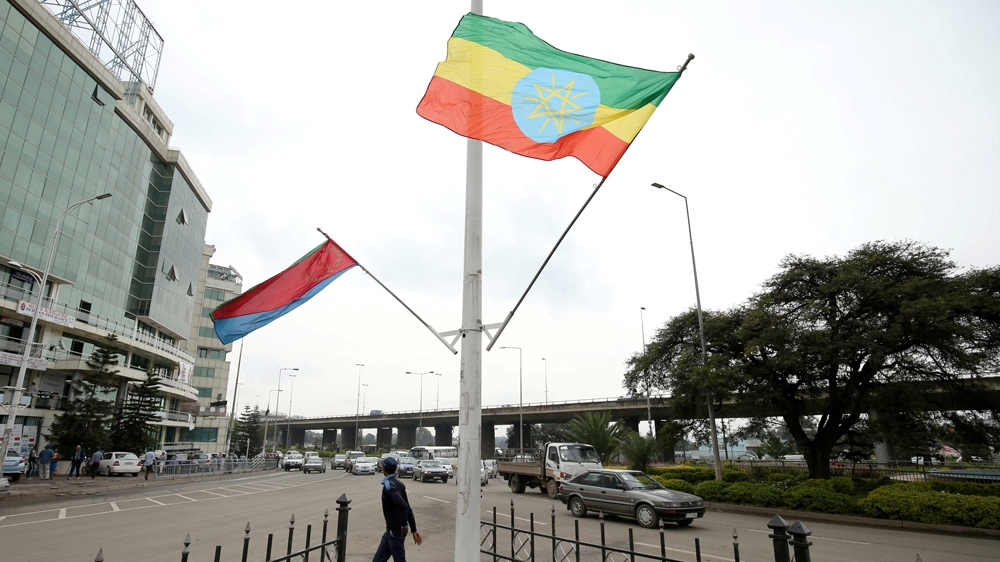 Flags of Ethiopia and Eritrea seen side by side in the face of Eritrea’s President Isaias Afwerki’s visit to Addis Ababa According to Soi, it is still too early to tell how the new relationship will affect lasting peace in the region, but she said that it is “certainly hugely significant for the stability of the region”. “These are two countries that have been highly militarised, partly because of this mistrust they have had for each other. Both have accused each other of using militias to destabilise each other. We expect this to de-escalate,” she said. Both Eritrea and Ethiopia are expected to benefit from renewed trade ties between the two nations. Ethiopia, a landlocked country, will start using the ports of Eritrea, which will increase turnover. “This 20-year conflict has torn apart families and communities who shared the same language and who shared the same cultures,” Soi said. “Now those communities are going to come together freely so it’s good news for the region, but even more importantly for millions of Eritreans and Ethiopians who have been watching this and who have been saying that this what we want and it should have happened a long time ago.” Aljazeera]]>
READ ALSO:  Carlos Ahenkorah cleared recovered from Covid-19

Adding value to agric will create more jobs for the youth...

Qatar 2022: African champions Senegal latest to be knocked out