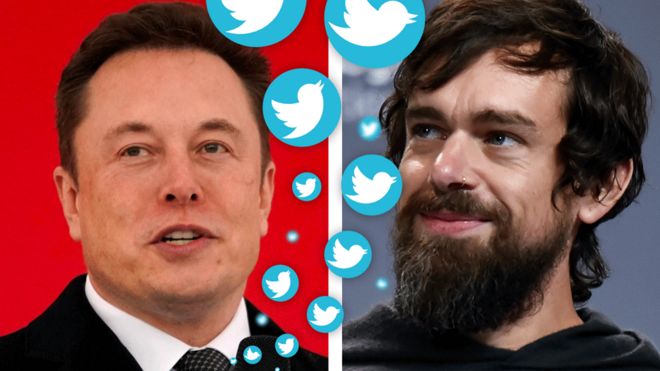 Mr Musk (left) is Mr Dorsey’s favourite, despite some rather controversial tweets[/caption]

Elon Musk has been named as Twitter boss Jack Dorsey’s favourite tweeter in an interview about how to tackle abuse.

The singling out of the Tesla boss has raised eyebrows because Mr Musk’s tweets have often proved controversial. One tweet about taking Tesla private saw him lose his job as chairman, while another has led to a defamation case. In the live-tweeted interview, Mr Dorsey also said that the way the social network had been handling abuse was “a huge fail”.

Mr Dorsey made his comments during a 90-minute interview with technology news website Recode. When asked whom he personally thought was exciting and influential on the platform, he wrote: “I like how @elonmusk uses Twitter. He’s focused on solving existential problems and sharing his thinking openly. I respect that a lot and all the ups and downs that come with it.” Elon Musk was happy to take the praise, tweeting: “Thanks Jack. Twitter rocks.” But others were less complimentary. “While lamenting harassment on Twitter, Dorsey praises Tesla CEO, who is being sued for defamation over a tweet,” wrote one user. Some of Mr Musk’s Twitter controversies include:
READ ALSO:  Elon Musk subpoenas former Twitter boss ahead of court battle

Twitter has been grappling with a range of issues such as how to crack down on fake accounts, election meddling, fake news and bullying on its platform. Shares in Twitter fell 10% this month, with revenue for the first quarter of 2019 expected to be below analyst forecasts. It has also lost users, down to 321 million from 330 million a year earlier. In the Recode interview, Mr Dorsey did not offer any new solutions but admitted that putting the burden on victims to report abuse was not the answer. Asked what grade he would give himself for “tech responsibility”, he replied: “Myself? C. We’ve made progress but it has been scattered and not felt enough. And we’ve put most of the burden on the victims of abuse (that’s a huge fail).” The public interview was given a dedicated hashtag – #karajack – but some attempting to follow it complained it quickly became confusing and difficult to follow, as more people joined in the conversation. This will not reflect well on Twitter, which has been accused before of not being very user-friendly. Mr Dorsey tweeted: “OK. Definitely not easy to follow the conversation. Exactly why we are doing this. Fixing stuff like this will help, I believe.” Source:BBC]]>