Emmanuel Armah-Kofi Buah is the MP for Ellembelle Constituency in the Western Region[/caption] Member of Parliament (MP) for Ellembelle Emmanuel Armah Kofi Buah has charged fellow MPs to develop a strong working relationship with their MMDCEs irrespective of the political party they belong to as that will safeguard development of their respective districts. “Between yourself as the MP and your DCE you have the option to either let your political differences thwart the development of your area or work together,” he said. “For me, I have decided to make education a topmost priority in Ellembelle and the DCE has been very supportive. And together we are doing great things for Ellembelle.” The MP offered the word of advice during the commissioning of a six-unit classroom block with ancillary facilities such as laboratory, office and water closet toilet for the Ankobra Catholic Primary School at Ellembelle. “I am a living testimony of what education can do for anyone especially if you consider my background. So, I was very clear in my mind the problem I will be addressing when I decided to spend GH¢287,000 on this beautiful edifice. If you consider that as an MP, I get only GH¢29, 000 as my Common Fund and how much this building cost me, you will appreciate my efforts”. He said “but I am happy that now that boy or girl whose education will have suffered due to the unavailability of a school block here at Ankobra will now be able to hope for a better future and as an MP I will also be proud that I contributed”. 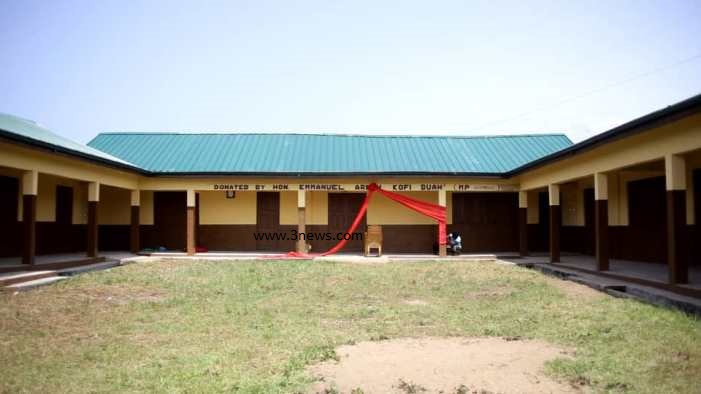 District Chief Executive of Ellembelle Kwasi Bonzo spoke of the many interventions the New patriotic Party (NPP) government have initiated to ensure every child of school-going age gets educated. “Look at the wonders the Free Senior High School [Policy] is doing. Now I’m sure all the naysayers have reversed their stance on the Free Senior High School Policy”. Kwasi Bonzo also said “if I have been able to work with Armah Kofi Buah it is because to me the interest of Ellembelle should be above all considerations”. “As the DCE I was appointed to help develop Ellembelle. The MP was equally voted to do same. So why don’t we join forces and work to achieve the reason why we are both in office. In fact, for us here at Ellembelle what we [MP and DCE] are doing is a novelty which other areas must learn and I believe Ghana will be the ultimate winner”. He said the Assembly is mobilizing funds to construct an ultra-modern kindergarten for the Ankobra Community, adding “if next year by this time the school is not up and functioning don’t vote for me”. By Eric Yaw Adjei|3news.com|Ghana]]>