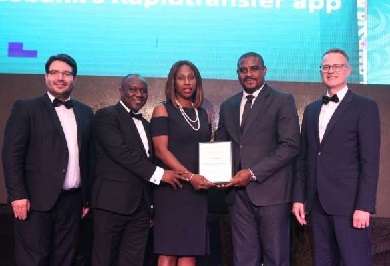 Ecobank’s rapid transfer app has been named ‘Best Remittance Product and Service of the Year’ by the Asian Banker Excellence in retail financial services awards for West Africa.

Currently, the Asian Banker Awards covers the Asia Pacific, the Middle East and West Africa where more than 300 banks and non-bank retail financial services players in more than 42 countries are evaluated.

He congratulated Ecobank for winning the award  and explained that the programme also assesses all new players such as payment companies, marketplace platforms and alternative financial services platforms made possible by financial technology (fintech) who are greatly contributing to the transformation of the retail financial services industry.

He said through the awards, the of Asian Banker aims to capture the evolving competitive landscape and recognise the outstanding players and initiatives, from which the industry can learn from to better provide consumer products, services and experience.

Receiving the award on behalf of the Ecobank Group, Executive Director in charge of Commercial Banking, Caro Oyedeji, thanked the organizer for engaging in the rigorous exercise to arrive at winners of the various awards, stressing that Ecobank retail business has witnessed substantial transformation, innovation and growth in all its segments and dimensions – customers, products and channels in recent years.

She disclosed that Ecobank is now being commonly regarded as digital payment solution bank because of its offerings such as Rapid Transfer, EcobankPay, OMNI and Xpress account, among others.

Ecobank Group Head, Remittances & Mobile Money, Linus Adaba also described the awards as a worthy recognition of the Rapid Transfer App which is one of Ecobank’s landmark initiatives targeted at easing the process and enabling Africans in diaspora send money to their loved ones back home on the continent.

“Many Africans work elsewhere in Africa, or further afield in Europe, America and Asia and financially support their relatives back home. Rapid transfer is a safe and secure low-cost remittance solution, which ultimately will put more money into the hands of the recipient.

“This will have a multiplier effect on the African economy by boosting demand and driving business growth. Rapid transfer removes all of bottle necks and high cost of sending money back home. Its standout affordability is a game changer in the way that Africans send money to their loved ones.

“I use this opportunity to dedicate these awards to all hard working staff of the Ecobank Group, who have tirelessly worked to see the success of the bank.

And also to all Africans who believe in us and have continued to encourage our efforts by adopting our products,” he stated.

The rapid transfer app can be downloaded on Play stores.