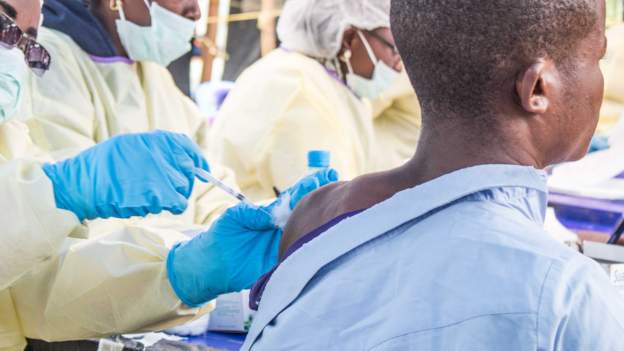 More than 60,000 traders in eastern Democratic Republic of Congo who cross the border regularly into Rwanda and Uganda are to be vaccinated to curb an Ebola outbreak.

Cases recorded recently in the Congolese trading hub of Goma, which is on Rwanda’s border, and have raised concerns of cross-border spread.

According to Jean Jacques Muyembe, the co-ordinator of the Ebola response in DR Congo – where the virus has killed more than 1,900 in the last year – the health authorities in Rwanda have also ordered 100,000 doses of the vaccine for a similar campaign targeting traders.

Over the last month, Rwandan border officials have been limiting the number of traders they allow over to Goma each day.

It is not clear when the mass vaccination campaign will start.

The experimental vaccine to be used is backed by several international health experts, including the WHO, but has sparked some controversy in DR Congo.

The vaccine is produced by Johnson & Johnson and is different from the single dose Merck vaccine that has been used over the past year in DR Congo.

Sources within the response team told the BBC they were concerned about that fact that the Johnson & Johnson vaccine requires two doses given 50 days apart for it to be effective.

That could be challenging in eastern DR Congo, where people move around quite a lot and misinformation and distrust have already slowed down Ebola response efforts.