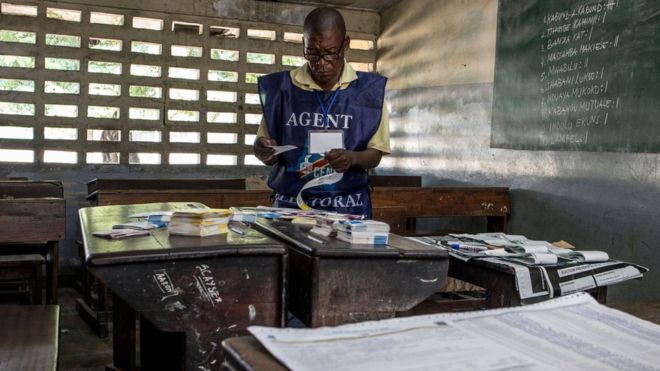 The results of last week’s presidential vote in the Democratic Republic of Congo will not be published on Sunday, officials say, despite growing calls for the outcome to be announced.

The head of the electoral commission said this was because less than half the ballots had arrived.

His spokesman told the BBC a meeting would be held on Sunday over the delay.

‘At least 15 people dead as boat capsizes in DR Congo’

The Catholic Church, which fielded thousands of observers, said on Thursday there was a clear winner.

It called for the result to be made public to avoid political unrest.

This drew an angry response from the coalition in power which said the church was “doing something illegal” and accused it of “preparing the population for insurrection”.

The Church had been vocal in its opposition to the extension of President Joseph Kabila’s rule.

He is stepping down after 17 years in office and has promised DR Congo’s first orderly transfer of power since it gained independence from Belgium in 1960.

The official result was due to be announced on Sunday, although the electoral commission had warned a few days ago this could be delayed.

The head of the commission, Corneille Nangaa, said on Saturday that less than half of all the votes had been counted.

“It is not possible to publish the results on Sunday. We are making progress, but we do not have everything yet.” No date for the announcement was given.

On Thursday, the National Episcopal Conference of Congo (Cenco) – which deployed some 40,000 election observers on voting day – said there was a clear winner based on its tally of the votes.

They did not name anyone but urged election officials “to publish the election results in keeping with truth and justice”.

The ruling FCC (Common Front for the Congo) told the BBC only the electoral commission is officially allowed to announce results.

There are 21 candidates, but three frontrunners:

Mr Kabila took over from his assassinated father Laurent in 2001. He was elected in 2006, and secured another term in controversial elections in 2011.

He was barred from running for another term under the constitution, and was supposed to step down two years ago, but the election was postponed after the electoral commission said it needed more time to register voters.

The decision triggered violent clashes, as the opposition accused Mr Kabila of trying to cling on to power.

The run-up to this poll was also hit by controversy over the exclusion of some 1.26 million voters, out of an electorate of nearly 40 million.

The electoral commission said voting could not take place in the eastern cities of Beni and Butembo because of a deadly Ebola outbreak in the region. Voting was also called off in the western city of Yumbi because of insecurity there.

Ayew, Schlupp combine to send Palace through in FA Cup

‘At least 15 people dead as boat capsizes in DR Congo’

Ayew, Schlupp combine to send Palace through in FA Cup