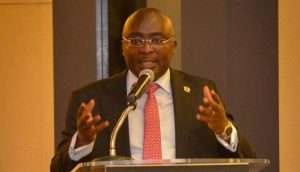 Vice President, Dr. Mahamudu Bawumia, has challenged his critics to provide their own data to counter what he has provided to reinforce government’s position that the economy is on track.

Opening the much-publicised economic town hall meeting Wednesday, Dr Bawumia said he would premise his assessment of the economy on available data, stating “data speaks for itself”.

He added that if anyone will doubted the accuracy of the data he would use to assess the health of the economy, then the person should also alternative data.

“If you disagree, you should bring your own data and your record”, he stated, and advised critics not to resort to insults, stating “don’t disagree by saying the economic management team members have big heads. You only resort to insults when you’re allergic to facts.”

In his  quick review of the economy from 2011 to date, he observed by the end of 2016  “the fundamentals of the economy were generally weak”, a situation he said led to the classification of the country as highly debt stressed country.

He however said the Akufo-Addo-led NPP government has been working hard “to get ourselves out of that classification”.

Though he admits his government has borrowed a little over 51 billion dollars so far, he explained that does not burden the country as much as it did in past.

“The additional borrowing has not added significantly to debt servicing obligations”, he said.