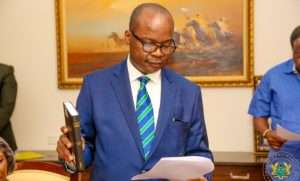 Governor of the Bank of Ghana Dr Ernest Addison has said the clean-up exercise carried out within the banking sector in 2017 is not done.

He indicates that until persons involved in violating one law or the other are prosecuted, the reforms which saw some banks fold up will not be complete.

“Until we finish with the judiciary process, I think that the cleanup is not completely done.”

The steps taken by the Central Bank to sanitize the banking sector resulted in the closure of certain distressed banks.

Thirteen billion Cedis was injected into the sector to recapitalize some banks while five others – Royal, Beige, Sovereign, Construction and uniBank banks – were consolidated.

Speaking in an exclusive interview with 3news.com‘s Etornam Sey, the Central Bank Governor noted that the economy is doing well following the clean-up and the individuals involved will be dealt with by law to retrieve monies that were unlawfully diverted.

“Government intervention through the issue of bonds of almost $12 billion is not where the process ends.

The Governor also said the Central Bank has instituted term limits for boards of the banks as well as other stiff regulations for the constitution of same.

According to him, GHȻ 4 billion has been injected into the economy as a result of the clean-up.

But for the intervention of the government through the central bank, he contends, depositors would have been queuing for their deposits due to the liquidity challenges facing some of the banks.

“If you look at the depositors’ funds that have been protected, over a billion. You also have 1.5 million depositors in the microfinance sector. If you look at the number of staff that have been absorbed; about 3,000 of these staff are working with the Consolidated Bank. These are people who could have lost their jobs if we had not intervened and we allowed the system to collapse. So you have to look at it positively.”

What happens to a body donated to science?

What happens to a body donated to science?

EC to tighten security at exhibition centers across country

Amantin Health Centre will be upgraded into Polyclinic – Mahama

EC to tighten security at exhibition centers across country

Amantin Health Centre will be upgraded into Polyclinic – Mahama