Elijah and Jessy[/caption] It was a race for who gets the magic hands last Friday when 10 beautiful ladies battled it out for the attention of professional masseur, Elijah, who was one of the eligible bachelors on TV3’s Date Rush. After watching a short profile of Elijah and hearing he is a professional masseur, all ten ladies kept their rush on, indicating that they were all interested in going on a date with him. It took a second and a third viewing of the continuation of his profile to get the number of ladies still interested down to four. While some of the 6 ladies who rejected him said he was boring after listening to the continuation of his profile, others thought he will be stingy with his compliments since he seems like a quiet man, hence the rejection. Elijah had the honour to then choose his preferred date out of the four who still showed interest. Upon contemplation, he narrowed down the number to 2 ladies to whom he posed the question: “What structures are you putting in place now for where you want to be in the next two years?” He finally settled on Jessy who said she is currently studying to acquire the required skills needed for her to establish a business and thrive as an entrepreneur in the next two years. For the second bachelor on the show Viela, who is currently studying to become a nutritionist, he got to walk away with his date, Peace, who he said was one of the ladies who caught his eye immediately he appeared on stage. Looked like ‘Cupid’ was at work, because Peace kept her rush on for him through till the end when he had to choose between her and another lady. Viela asked the two ladies what they would sacrifice for love, and for Peace, she would go as far as donating a kidney to her partner. This seems to have wowed Viela as he settled on her for a date. [caption id="attachment_137008" align="aligncenter" width="795"] 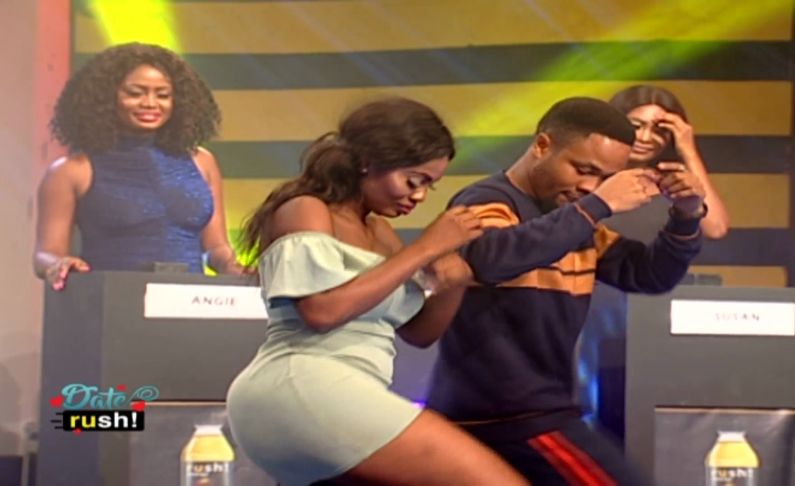 Viela and Peace[/caption] Both Elijah and Viela will go on a fully sponsored date with their respective men, kind courtesy ‘Rush Energy Drink’. Date Rush, which many prefer to call a match-making show, airs every Friday on TV3 at 9:00p.m.