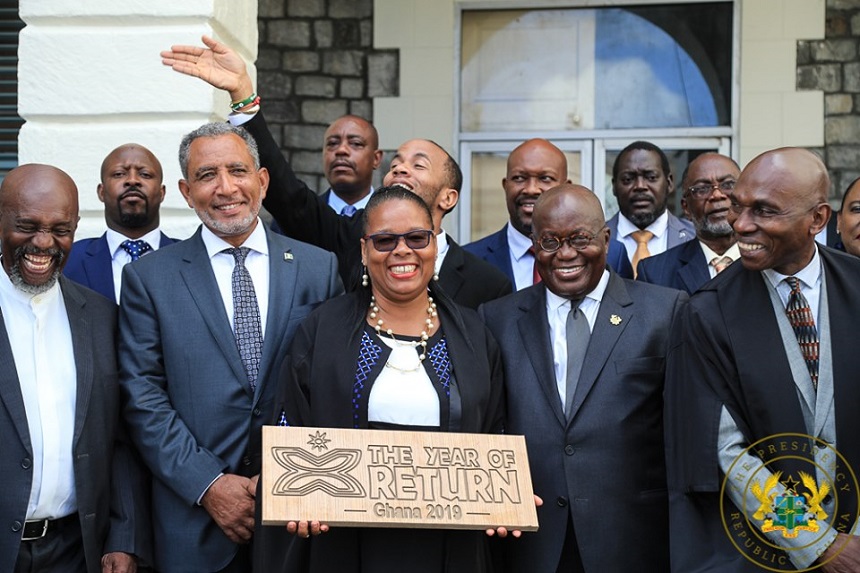 President Nana Akufo-Addo has called on the people of Trinidad and Tobago to come over to Ghana to join in the celebration of the 400th anniversary of the start of the Trans-Atlantic Slavery. Dubbed “The Year of Return,” the celebration is to demonstrate to the rest of the world that Africans on the continent and in the Americas have overcome slavery. The President made the call when he addressed a joint press conference with the Prime Minister of Trinidad and Tobago Keith Rowley, at the Diplomatic Center in the capital city, Port of Spain. “The commemoration should enable us and the African Union to consolidate and strengthen our links with our sixth region, that is, the African diaspora. As we mark the 400th anniversary, come and visit and let us together demonstrate that we have overcome,” Nana Akufo-Addo said. “Let us show we can return, we have returned, and we have conquered the humiliation and degradation of four hundred years ago,” President Akufo Addo said. Nana Akufo-Addo said he looks forward to many Trinidadians taking up the invitation extended to them by Ghana to be part of the celebration. On the issue of air services between Ghana and Trinidad and Tobago to serve as a direct link between West Africa and the Caribbeans, Prime Minister Rowley the issue was discussed with President Akufo-Addo during bilateral discussions. He said further consultations will be carried out in that regard to work out modalities for a possible “Air Services Agreement” that would see Caribbean Air flying directly to  Ghana as well as other parts of the African continent. President Akufo Addo welcomed the idea of a possible Air Services Agreement between Ghana and Trinidad. He indicated that within the frame work of the ongoing discussion between Ghana and Ethiopian Airlines, a direct flight route between Ghana and the Caribbean world will be given consideration to explore the possibilities of having same. Nana Akufo-Addo is leading a Ghanaian delegation, comprising the Minister for Foreign Affairs and Regional Integration, Shirley Ayorkor Botchway and the Minister for Tourism, Arts and Culture, Barbara Oteng Gyasi, MP for Prestea Huni Valley, on the tour. The countries visited so far by the President are Guyana, St. Vincent and Grenadines, and now Trinidad and Tobago. He is moving on to visit Barbados and finally Jamaica. The event of the “Year of Return” aims at solidifying relations with descendants of Africa resident in the Americas and the Caribbean, who have been defined as the sixth region of the Africa Union.

The royalties from GHAMRO are insults to artistes – Natty Borax

Azonto is not dead: Gasmilla calls for it to be made music genre