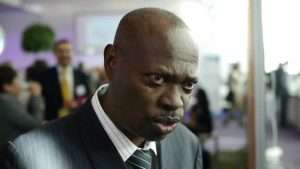 There was drama in court when a special adviser to the Minister of Agriculture fumbled, for greater part of cross-examination, as he tried strenuously without much success to remember names of American NGOs he claimed he worked with between 2014 and 2016.

Dr. Yaw Adu-Ampomah had in previous sitting told the Accra High Court presided over by Justice Clemence Honyenuga that he worked as a consultant to some Dutch and American NGOs after his retirement from COCOBOD.

Initially, he had told the court he retired in 2013 and repeated same during the cross-examination, but after he was put to strict proof, Dr. Adu-Ampomah paused for a while and admitted that he actually retired in 2012 but was given one year extension.

Dr. Adu-Ampomah was asked during the cross-examination by Samuel Cudjoe, lawyer for Dr. Opuni, whether he stood by his submission at his evidence in chief that he worked for Dutch and American NGOs, he answered in affirmative.

When asked to name them, after minutes of back and forth, he could only mention Solidaridad, a Netherlands-based international organization headquartered in Utrecht.

For close to an hour, the hitherto eloquent Dr. Adu-Ampomah became elusive as he was pressured by Samuel Cudjoe for names of other companies he worked with.

“So then I take it that you don’t know the name of the American company you worked with,” the counsel asserted.

“My Lord in my statement I said there are several of them so I would not know,” he responded.

The counsel, who appeared amazed by Dr. Adu-Ampomah’s inability to mention the name of the American organization, asked the research scientist if he knew the full meaning of NGO, which he rightly gave as non-governmental organization.

Pointing out that NGOs are corporate organizations, lawyer Cudjoe put it to Dr. Adu-Ampomah that if he had worked for an American and Dutch companies he would have definitely know their names.

“My Lord I bound them together so if you like, I will mention more. One of them is Rainfall Alliance [sic] ,” Dr. Adu-Ampomah remembered. A search rather revealed that the NGO’s name is Rainforest Alliance based in the United States of America.

Find excerpts of the proceedings below

Q: So Dr Ampomah, you informed this court that you were working for American and Dutch NGOs. Do you still maintain that?

Q: What is the name of the American NGOs you talked of.

Ans: These NGOs were linked to America department of agriculture and they were helping Ghanaian local company to help local farmers to improve their livelihood.

Q: Dr. Can you give me the names of the American NGOs you were working for?

Ans: The descriptions I said is that these local companies will put up a proposal sourcing for funds and when they find a funding agency, their proposal is brought to me to review and recommend, and one of the companies which has been funded through these means is cocoa Abrabo pa

Q: So then I take it that you don’t know the name of the American company you worked with.

Ans: My Lord in my statement I said there are several of them so I would not know.

Q: So with the Dutch company you know the name that is Solidaridad but with the American NGO you don’t know.

Q: So it is true that as you sit here you can mention your employers.

Ans: What I meant was that the funds were coming from [different sources] so there were no specific American NGO

Q: Dr. as you sit here, you are a very intelligence man, right?

Q: What is the full meaning of NGO?

Q: You know all NGOs are corporate organizations?

Q: So you know all NGOs have names because they operate in a capacity.

Q: I’m putting to you that if you have worked for American and Dutch companies you would have definitely know their names.

Ans: My Lord, I bound them together so if you like, I will mention more. One of them is Rainfall Alliance [sic].

Q: Is it an American company?

Ans: I can’t tell you off hand

Q: You said the NGOs employed you to work on the effect of the lives of cocoa farmers at cocoa growing areas?

Ans: Is to advise them on how to improve their lives.

The case continues on Tuesday May 28 in the afternoon