The Ghana Cocoa Board (COCOBOD) has secured $1.3 billion from a consortium of 25 banks to finance cocoa production and purchases in the 2017/18 cocoa season. An agreement to give meaning to the transaction was signed at a ceremony chaired by Ghana’s Ambassador to France, Ms Anna Bossman, in Paris on Wednesday. The Chief Executive Officer (CEO) of the COCOBOD, Mr Joseph Boahen Aidoo, signed on behalf of the COCOBOD, while representatives of the participating banks initialled for their respective banks. At the ceremony, Mr Aidoo said the loan was expected to support over 800,000 cocoa farm households and thousands of people in cocoa-growing communities and their ancillary areas. Although bids for this year’s cocoa loan totalled $2.4 billion, he said, the board turned down additional offers, translating into 84.6 per cent, and rather took the $1.3 billion that it had budgeted for. Interest on loan The funds are expected to fund the production and purchase of some 850,000 metric tonnes of cocoa beans in the season, which opens on October 1, this year. Mr Aidoo explained that the over-subscription of the loan was a sign of the confidence that the international financial market had in the country’s cocoa sector and the economy in general. That confidence, he said, “stems, in part, from COCOBOD’s ability to repay the loan without default”. “Each annual facility, plus the medium-term finances, has been repaid in full, either on or before maturity, making our repayment record legendary,” he said. The CEO explained that although the board had scheduled to complete repayment of the 2016/17 facility by the end of August, a spirited “effort in the face of dire market challenges” helped the board to finish repayment before the end of July this year. “I am, therefore, not surprised that the 2017/18 facility has been oversubscribed,” he stated. [caption id="" align="alignnone" width="558"] 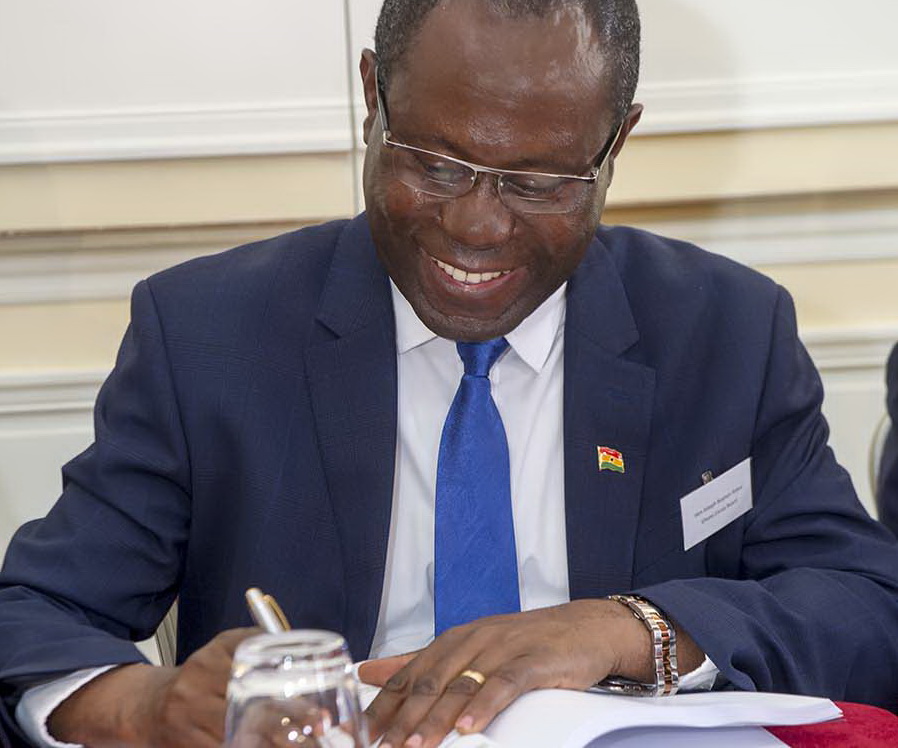 Mr Joseph Boahen Aidoo, CEO of COCOBOD, appending his signature to the loan agreement[/caption] Last year, the board secured $1.8 billion through its age-old cocoa loan syndication process, touted as the best commodity-backed deal in sub-Saharan Africa. The loan will be repaid at an interest rate of 1.88 per cent, slightly above the 1.47 per cent that last year’s facility attracted. Mr Aidoo said the first tranche of the loan was expected to hit the accounts of the board in the first week of October.

READ ALSO:  Teachers development and conditions to be enhanced - Prez
Impact on economy An economist and Senior Research Fellow at the Institute for Fiscal Studies (IFS), Dr Said Boakye, said the successful raising of the loan was helpful to the economy. “It is an annual event and so it is not so wonderful, but it is helpful because when the money comes in, it helps with the stabilisation of the cedi and makes money readily available for the purchase of cocoa,” he told the Daily Graphic in an interview. While commending the board for maintaining the integrity of the syndication process, Dr Boakye wondered why COCOBOD reduced the loan amount from $1.8 billion in the 2016/17 crop season to $1.3 billion. “In comparative terms, the amount raised is not so sufficient. Does that mean that COCOBOD envisages a reduction in output?” he asked, stating that the drastic reduction was unusual and could limit the impact of the loan on the exchange rate. Mr Aidoo, however, hinted that the board could be returning to the banks for more money to finance its upstream capital projects, including cocoa roads, railway infrastructure and yield enhancement techniques. Commendation The cocoa loan syndication process started in the 1992/93 cocoa season and has since become an annual affair that financial institutions across the world look forward to. The CEO said some 25 years down the line, Ghana had a lot to show for the over two decades of cocoa financing. “From a production of 255,000 metric tonnes in the 1992/93 season, our production has more than tripled. On behalf of the government and the people of Ghana, let me seize this opportunity to thank all previous participating banks that have helped stay the course of our cocoa industry,” he said.
READ ALSO:  President's nominee for Ajumako-Enyan-Essiam District rejected
Source: Daily Graphic | Ghana]]>