CID boss, DCOP Tiwaa Addo-Danquah[/caption] The Criminal Investigations Directorate (CID) of the Ghana Police Service has taken on the Office of Special Prosecutor in what it describes as an attempt to discredit it in an oil misappropriation case. In a letter to the CID, the Special Prosecutor, Martin Alamisi Amidu, accused the Directorate of failing to supply it with a 2011 docket on a probe into the misappropriation of a $15 million oil deal. The CID, however, says the dockets on the case have gone missing for the past eight years. Director DCOP Nana Yaa Tiwaa Addo-Danquah says that dockets are not in the records of her section. On June 14, 2018, Martin Amidu first wrote to the Directorate, requesting a duplicate of the docket in the case involving the Republic vrs George Yaw Owusu and Kwame Barwua Edusei. The reference was hinged on a 2011 letter by the then Director of Public Prosecutions,  Getrude Aikins, asking the CID – at the time headed by Prosper Agblorh – to instruct the investigator of the case, the late Inspector Noah Bonny, to charge the suspects or prove against the sureties.

Gertrude Aikins also directed the then CID boss to instruct the investigator to take statements from one Jemima Oware of the Registrar General’s Department on the effect of forgery committed by George Yaw Owusu on the registration forms with an express instruction for the docket with a comprehensive report to be made available to the Attorney General’s Department. The CID on June 20, 2018 wrote back to the Special Prosecutor and expressly stated it has made strenuous efforts to locate the duplicate to no avail. 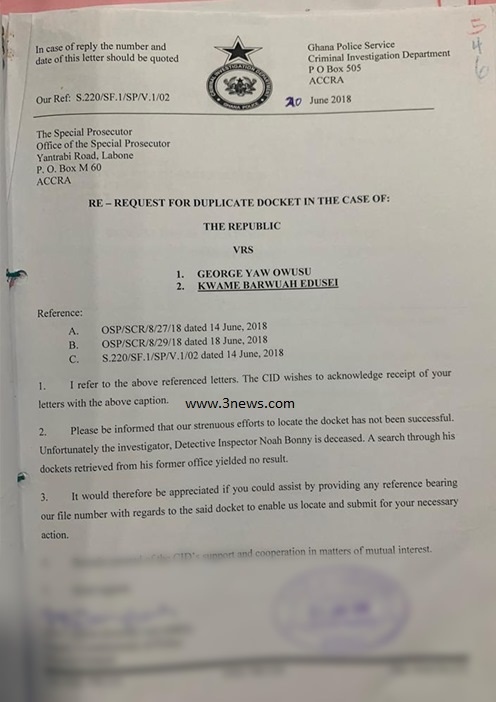 In the letter, the CID also states the search was extended to late investigator Noah Bonny’s house but still not found. 3news.com’s investigations at the CID have revealed that the defunct Vetting Criminal Intelligence Analysis Unit under the CID was in charge of the investigations. It was headed by ACP Denis Ablade. The Unit was, however, dissolved in 2014. Special Prosecutor Amidu again in a long request in June, 2018 to the CID further demanded to be provided with the duplicate copies, responding to the first letter of the CID. He said death should not be an impediment in the search for dockets for prosecutions. The CID was, however, swift in responding to Martin Amidu, stating it will not relent in its quest to locate the said docket assuring the SP of its professional cooperation. 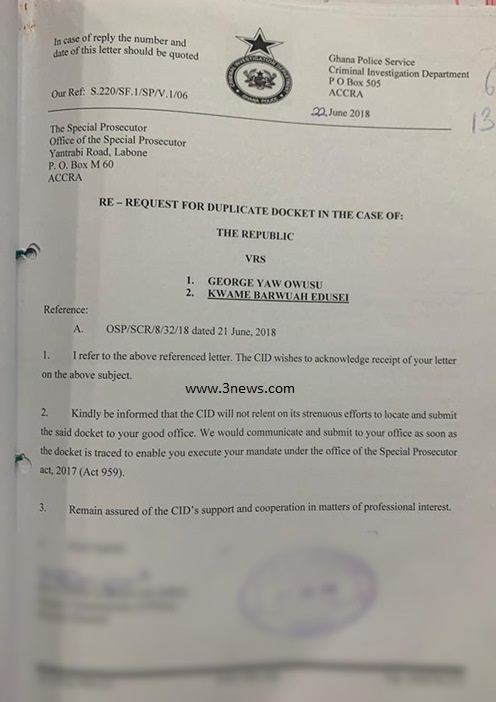 But in his latest request to the CID sighted by 3news.com, Martin Amidu described the supposed lack of action from the CID as “scandalous” because of the money involved. The CID has assured that it has started a digital case tracking management system to keep all its dockets and documents. The case has to do with the alleged diversion of $15 million reportedly paid to the Government of Ghana as part of corporate social responsibility (CSR) for the development of the West Cape Three Points Area in the Western Region. As a condition for then President John Atta Mills giving executive consent to permit the E.O. Group to assign $300 million worth of shares to Tullow, the E.O. Group agreed to pay the money.
READ ALSO:  3News Highlights - Monday, September 12
By Komla Klutse|3news.com|Ghana]]>