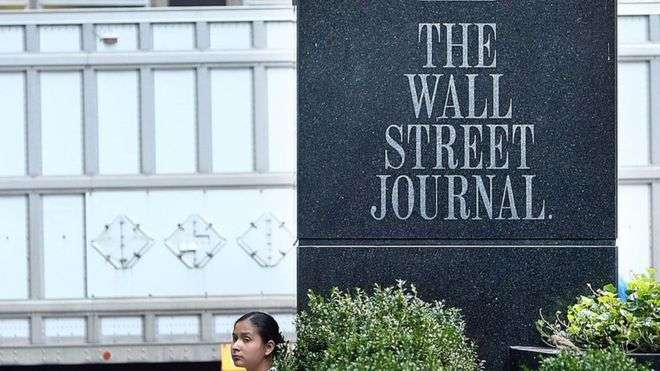 China has ordered three foreign journalists of the Wall Street Journal to leave the country over an opinion piece it said was “racist”.

The article published on 3 February criticised the country’s response to the deadly coronavirus outbreak.

The Chinese foreign ministry said it had asked the newspaper to apologise several times but it had declined.

The newspaper said the journalists – who had not written the opinion piece – were given five days to leave China.

China’s decision came a day after the US State Department tightened rules on Chinese state media organisations operating in the US, classifying them as foreign missions.

It told five outlets including state-run Xinhua news agency and the China Global Television Network that they had to submit lists of all employees, even though there would be no restriction on their reporting.

The WSJ article called the authorities’ initial response “secretive and self-serving” and said global confidence in China had been “shaken”.

China’s Foreign Ministry spokesman Geng Shuang said the article was “racist” and “denigrated” China’s efforts to combat the outbreak that has killed more than 2,000 people in the country.

“The Chinese people do not welcome media that publish racist statements and maliciously attacks China,” Mr Geng said, without naming the journalists being expelled.

The Wall Street Journal identified the reporters as two US citizens – Josh Chin, who is the deputy bureau chief, and Chao Deng – as well as Australian citizen Philip Wen.

The newspaper’s publisher, William Lewis, said in a statement that he was “deeply disappointed” with the decision and emphasised the “complete separation” between the outlet’s opinion and news departments.

“Our opinion pages regularly publish articles with opinions that people disagree – or agree with – and it was not our intention to cause offense with the headline on the piece,” Mr Lewis said. “However, this has clearly caused upset and concern amongst the Chinese people, which we regret.”

It is the first time in more than two decades that journalists holding valid credentials have been ordered to leave China, the BBC’s John Sudworth in Beijing reports.

The Foreign Correspondents Club of China called the decision “an extreme and obvious attempt by the Chinese authorities to intimidate foreign news organizations”.

Last year, the government declined to renew the credentials – necessary for the work of foreign journalists in the country – of another Wall Street Journal reporter.

The journalist, a Singaporean national, had co-written a story that authorities in Australia were looking into activities of one of China’s President Xi Jinping’s cousins suspected of involvement in organised crime and money laundering.

And in 2018, the Beijing bureau chief for BuzzFeed News Megha Rajagopalan was unable to renew her visa after reporting on the detention of Muslim minority Uighurs and others in China’s Xinjiang region.

Meanwhile, two Chinese citizen journalists who disappeared last week after covering the coronavirus in Wuhan, the epicentre of the outbreak in Hubei province, remain missing.

Fang Bin and Chen Qiushi had been sharing videos and pictures online from inside the quarantined city.

Air France-KLM plans to cut more than 7,500 jobs at its French arm as the airline industry reels from the...

Ghana’s coronavirus record has gone up by 390 new cases taking the national tally to 17,741 positive cases. The number...

Ethiopian ‘aged over 100’ recovers from Covid-19