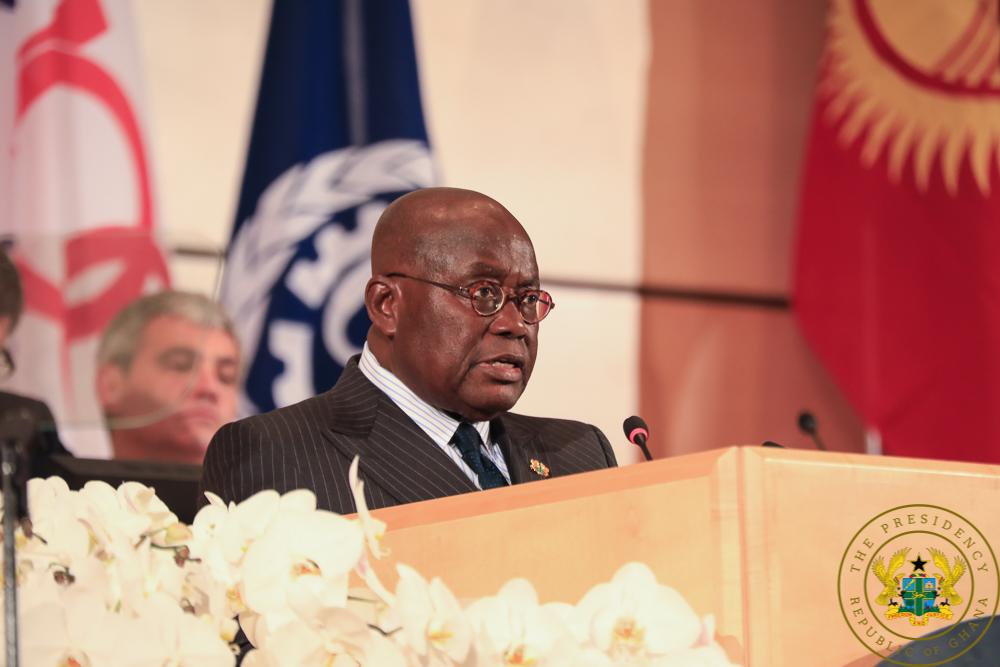 Ghana’s President, Nana Addo Dankwa Akufo-Addo, has called for a change in the governance structure of the International Labour Organisation (ILO), the United Nations agency whose mandate is to advance social justice and promote decent work by setting international labour standards. According to President Akufo-Addo, African Ministers of Labour, at their last meeting in Addis Ababa, Ethiopia, two months ago on 4th April, were of the strong conviction that improving governance at the ILO is synonymous with the effective implementation of the ILO’s responsibility in the interest of its constituents. The African Ministers of Labour reiterated and supported the urgent call for making the Governing Body more representative, by providing a means of appointment of its members, which takes into account the various geographic, economic and social interests of its constituent groups.” It was, thus, the expectation of President Akufo-Addo that “that the Instrument of Amendment to the ILO Constitution, 1986, will be given a chance to feature prominently in subsequent discussions during this centenary celebration.” The President was speaking at the 108th session of the International Labour Conference, which is also commemorating the centenary celebration of the International Labour Organisation, on Monday, 10th June, 2019, when he made this known. In his remarks, President indicated that his government is committed to a new social contract that promotes social dialogue in economic management, and in the making of public policy. This new social contract, he said, is also “to assure our workers and businesses that they are Government’s true development partners, and their ideas are critical in my Government’s model for economic management and development.” Though Ghana has a large workforce, the majority of people are underemployed, inappropriately employed or unemployed. “Recognising the severity of joblessness in Ghana, upon assumption of office, we have put in place bold, innovative and urgent steps to ameliorate the situation. We have turned our back on the old economy, which was based on the production and export of raw materials, and we have embarked on establishing a value-added, industrialised economy, supported by heightened agricultural productivity,” he said. President Akufo-Addo stressed that this is the sure way of creating thousands and thousands of decent, well-paying jobs for the mass of Ghanaians, and lifting them out of poverty. To this end, the first task, the President said, has been to get the Ghanaian economy out of the doldrums, and also create the atmosphere for entrepreneurs to bring on the jobs. “We have chalked modest successes in this regard, with Ghana’s economy projected by the IMF to be the fastest growing economy in the world this year. We are now the largest recipient of foreign direct investment in West Africa, we have some of the world’s largest companies setting up shop in Ghana, and we have, recently, become the largest producer of gold in Africa,” he added. Additionally, President Akufo-Addo said his Government has rolled out the programme for “Planting for Food and Jobs”, which is providing incentives and boosting incomes of one million farmers. The “One-District-One-Factory” and “One-Village-One-Dam” programmes, and the Zongo Development Fund and the Infrastructure for Poverty Eradication Programme (IPEP), he added, are all being pursued to stimulate job creation opportunities across the country. The President told the Conference that his Government has begun to rectify the serious neglect of skills training by modernising and strengthening Technical Vocational Education and Training (TVET) institutions. “We are also tailoring the curriculum of skills development and job learning based institutions to current industrial needs, both at the enterprise level and the job market. Through these areas of commitment, my government intends to address the long prevailing skills mismatch between majority of school leavers and industry requirements,” he said. The President informed the Conference that, acting through the Trades Union Congress and other labour organisations in Ghana, has fully endorsed these policies, and has pledged support to ensure the attainment of the goal of the creation of decent jobs for all Ghanaians. “It is a pledge that I welcome warmly. We are determined to consolidate further the relations with our Social Partners,” he added. Again, President Akufo-Addo told the gathering that, on 18th April, 2019, his Government signed a landmark social partnership agreement with Organised Labour represented by the Trades Union Congress, Employers, represented by the Ghana Employers’ Association, and Government, represented by the Ministries of Finance and Employment and Labour Relations, to provide a medium for building a sense of cohesion, trust, self-management, frank and open discussions to champion the cause of development towards realising our vision of a Ghana Beyond Aid.