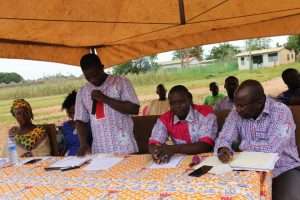 The Coalition of Concerned Teachers, Ghana (CCT-Gh) has given government up till Thursday, December 5 to complete payment of salary arrears.

According to a statement issued by the Coalition on Friday, November 29, payment of the arrears will “avoid an industrial unrest at the education front”.

The Coalition claims the issue of salary arrears has been a “pain in our neck as a union and that of teachers, especially those affected”.

It said assurances were given on September 13, 2019 at a meeting held at the instance of the Minister of Employment and Labour Relations, Ignatius Baffour Awuah.

At that meeting, CCT-Gh said an agreement was reached to have 2,069 teachers paid with a supplementary voucher by the middle of October.

“We left the meeting assured that, the above will be adhered to. But it did not happen as expected.”

Another meeting held on October 21, 2019 in the presence of a Deputy Minister of Employment and Labour Relations, Bright Wireku-Brobby, assured that by the middle of November, payments will be effected by the Controller and Accountant General’s Department (CAGD).

“The status quo remains the same as at today 29th November, 2019. No arrears have been paid as agreed.

“We are by this statement, urging government to ensure that, this issue of arrears is done away with and that all teachers owed arrears should be paid latest by the 5th December, 2019 to avoid an industrial unrest at the education front.”

Schools in Ghana have been ordered to suspend all public activities on the back of two confirmed cases of the...

The Bunkpurgu-Nakpanduri District Education Director, Reverend Francis Kojo Ennuson, has lamented the furniture deficit for pupils in the district. He...