The Bissa Fitness Club GH has made a cash donation to 7-year-old George Owusu at the Child Health Department of the Korle-Bu Teaching Hospital in Accra.

George suffers from nephrotic syndrome, a condition where the blood vessels in the kidneys are damaged, resulting in the inability of the kidneys to filter waste and excess water from the blood.

His plight was brought to the attention of the club by a female nurse, who is also a member of the BFC (GH).

According to doctors at the facility, George needs a specific drug, to improve his situation.

However, authenticated versions of the drug can only be procured from the United States of America and a few other countries, prompting calls for external help.

Executives of Bissa Fitness Club and members were moved by the boy’s situation, and raised some money to support the family.

Receiving the donation on behalf of George and his mother, Dr. Janet Hagan expressed gratitude to the club for the gesture.

“We thank you for coming out to help.  As you can see for yourselves, he comes from a deprived home and you guys have just moved in at the right time.

“Your money will go a long way to help get the required medication for him. May God replenish whatever you have lost, and we pray you keep coming to help more of our children,” she remarked.

President of the club Hussein Hassan Yorda reiterated the club’s interest for humanity, indicating that the group has plans to carry out more of such outreach programmes.

“This is not our first, and certainly not going to be our last. Bissa Fitness Club is not just here to keep ourselves fit, but also to make positive impact in our society. Our motto, Zekula  N’panga which translates, ‘In Unity Lies Strength’, does not only call for the unity of Bissa, but the unity of humankind to intervene in such situations,” he said.

“We will at every point in time be checking on his progress, as well as that of the many other kids here. Thank you for the opportunity to help.”

On his part, Public Relations Officer of BFC (GH) Alhaji Shaibu Samandulugu, who supported the president’s remarks, noted that such gestures go a long way to guard and protect the country’s future leaders.

“You can tell from interactions with George, as little as he is that he is going to be someone great in future if he is well taken care of.  As such, we moved quickly to help, knowing that we may be helping the future president of this country. The health of these young ones must be paramount to us.”

The club will officially be launched on the 5th of October, at the Wembley Sports Complex in Accra. Preceding the event will be a walk through some major streets of the capital city on 29th September. 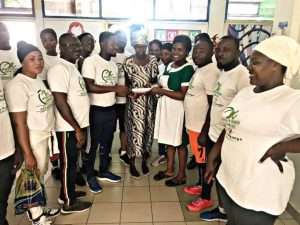