Barcelona’s hopes of making the Champions League knockout stage hang in the balance after they were held at the Nou Camp by Benfica.

On a frustrating night for Xavi’s side, 18-year-old Yusuf Demir, on loan from Rapid Vienna, had a shot tipped behind.

Ronald Araujo had a goal disallowed for second-placed Barca, who stay two points ahead of Benfica in third.

Both matches are on 8 December and it promises to be a tense finale for five-time European champions Barca.

While they are now undefeated in their past three group games, Barca have managed just two goals in five Champions League matches this season.

They will drop down to the Europa League if Benfica win their final match and Barca do not win in Germany. 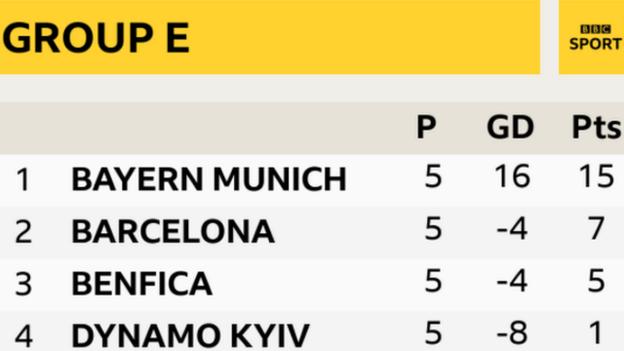 Benfica defended stoically, closing down attacks with a solid five-man defensive line, leaving Barcelona in control of the ball much of the time.

However, the hosts managed just three attempts on target.

Demir is the fifth teenager to start for Barcelona in the Champions League this season – following Pedri, Ansu Fati, Gavi and Nico Gonzalez.

Andre Ayew’s daughter fine after collapsing due to penalty miss

Andre Ayew’s daughter fine after collapsing due to penalty miss