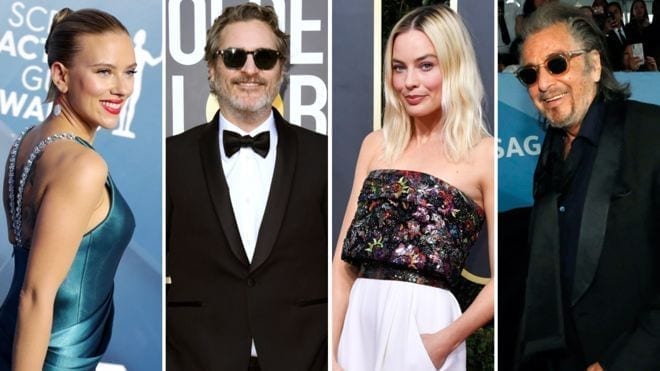 Stars of Joker, The Irishman and Once Upon A Time In Hollywood are preparing to find out whether they have won Bafta Awards.

This year’s ceremony takes place in London later, with Joaquin Phoenix, Al Pacino and Margot Robbie among the nominees expected to attend.

Joker leads the pack with 11 nominations, while The Irishman and Once Upon A Time… have 10 each.

But World War One epic 1917 is tipped to win the top prize, best film.

Sir Sam Mendes’s gritty drama has nine nominations, and is also the bookmakers’ favourite to be named outstanding British film.

When the nominations were announced almost a month ago, they sparked a row over a lack of diversity.

All 20 acting nominees are white, and no female directors were nominated for the seventh year in a row.

That meant there was no room for black British star Cynthia Erivo – who went on to be nominated for an Oscar for her role in Harriet, a biopic about slave-turned-abolitionist Harriet Tubman.

She told Variety it was “disappointing” that more diverse films would not be represented at the Baftas.

At the time, Bafta boss Amanda Berry said she was “very disappointed” by the lack of diversity, and the organisation has pledged to conduct a “careful and detailed review” of its voting system.

Eyebrows were raised by the fact there was room to give Johansson and Robbie two acting nominations each.

That category also includes Johansson for Jojo Rabbit, and she is also up for best actress for her role opposite Driver in Netflix’s divorce drama Marriage Story.

However, Zellweger is hot favourite to lift the best actress trophy for playing Judy Garland in Judy. The other nominees are Theron for Bombshell, Ronan for Little Women and Jessie Buckley for Wild Rose.

Phoenix is the tip to be best actor for playing the title role in Joker. He’s up against Taron Egerton, who played Sir Elton John in Rocketman, as well as Leonardo DiCaprio for Once Upon A Time…, Driver for Marriage Story and Jonathan Pryce for The Two Popes.

Pitt and Dern are the frontrunners in the supporting acting categories, for Once Upon A Time… and Marriage Story respectively.

While it may not scoop the acting awards, 1917 – inspired by a story told by Sir Sam’s grandfather – could take the greatest slice of glory on the night, especially if Mendes wins best director, as is widely expected, as well as best film and outstanding British film.

However, whichever movie wins the top prize, its success might not necessarily bode well for next week’s Oscars. For the past five years, the Bafta best film winner has not gone on to win best picture at the Academy Awards.

The Bafta ceremony will be hosted by Graham Norton for the first time, and will be broadcast on BBC One from 21:00 GMT.

It comes three days after figures were published showing a sharp drop in the number of independent British films that were made last year.