Dede Ayew plays in the Championship[/caption] He is the captain of Ghana and has spent his career playing at the top level for club and country. Yet as his 30th birthday approaches, Andre Ayew is playing Championship football for Swansea City despite the club spending much of the summer trying to offload him. How did it come to this? Ayew says there was much to consider during the close season, as clubs from across the globe showed an interest in a player with undoubted pedigree. But ultimately, this French-born star of African football opted for a third spell as a Swansea player. “I am happy to be back,” Ayew tells BBC Sport Wales. “I feel at home.” Ayew first joined Swansea when his Marseille contract expired in 2015. His signing looked a coup for the then Premier League club, and a return of 12 goals in Ayew’s maiden campaign led to a £20.5m move to West Ham the following summer. Ayew rejoined Swansea for a club-record £18m fee in January 2018 but could not save Carlos Carvalhal’s team from Premier League relegation come spring. A season-long loan move to Fenerbahce followed and few anticipated that Ayew would ever be seen in Swansea colours again. Yet after a year in Turkey and a summer spent focusing on the Africa Cup of Nations – Ghana lost to Tunisia on penalties in the first knockout round – Ayew returned to Swansea training last month. With clubs in England, Italy, Germany, the Middle East and China mentioned as potential suitors, it seemed inevitable Ayew would move on again. Yet he made a good impression on new Swans head coach Steve Cooper – and vice versa – while the sale of fellow forward Oli McBurnie to Sheffield United meant the Liberty club could consider keeping their record signing. A little over a month down the line Ayew, whose Swansea contract runs until 2021, looks to be on board until the end of this season at least. 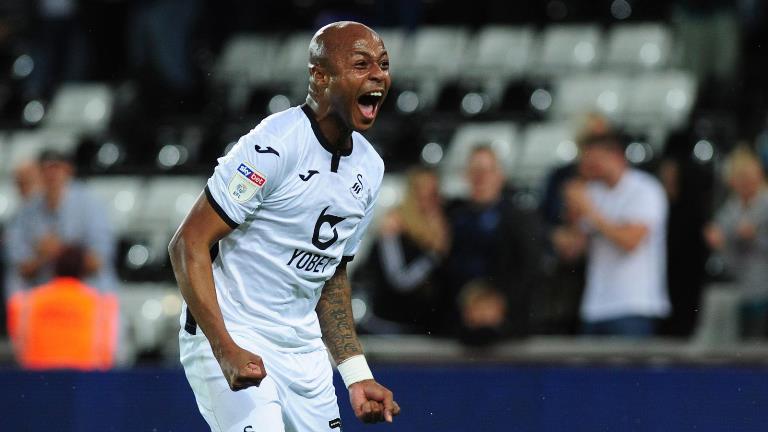 “There were a lot of possibilities for me to move,” Ayew says. “As soon as I got back I felt the desire from the manager, the players – they wanted me to stay – and for sure the fans. That was special for me. “When I felt that I started to think maybe we have to go for it again. “We were talking about finding a solution with other clubs. I said if I don’t find something which suits me 100 per cent I am not going to move just to say I play in Ligue 1 or Serie A or the Premier League. “The truth of the matter is a part of me wanted to stay here. A few days before the end of the market I told my agent: ‘I have made my decision and I want to stay’.” A veteran of the 2010 and 2014 World Cups, Ayew spoke to Ghana coach Kwesi Appiah before pledging his future to Swansea. The 84-cap forward was assured that a spell playing Championship football would not affect his international involvement. “He said: ‘It’s a very good league and if that’s your decision I am okay as long as you are fit and you do what you have always done with the national team’,” Ayew explains. “That was important because the national team is very, very important for me. “I have always represented my country with a lot of honour and a lot of pride. I am very proud of where I am from and of what any Ghanaian is doing. We have always tried to raise the flag really high.” Ayew believes he is a “better player” thanks to his spell at Fenerbahce – where he scored five goals in 29 Super Lig games – but adds that he missed the Premier League during the year away. “Football is played in so many countries and there are so many good clubs around the world, but England is the best league,” he says. Now Ayew is sampling the Championship, while younger brother Jordan – a former Swansea player – has made a strong start to the top-flight season at Crystal Palace. “Jordan has never got the recognition he deserves, but I think now people are starting to recognise his work,” Ayew senior says. “Hopefully very soon we will meet again in the Premier League.”
READ ALSO:  Ayew takes season tally to 12 goals in Qatari league
Cooper’s ‘big impact’ It is still very early in the season, but Swansea’s start has triggered unexpected optimism about their prospects of returning to the top tier. Until last weekend’s late loss to Nottingham Forest, Swansea had been unbeaten this campaign and sitting top of the Championship. Having dropped to second – albeit only on goal difference from Leeds United – they face another test of their credentials away to fourth-placed Bristol City on Saturday. The summer sales of Dan James and McBurnie – plus the loss of manager Graham Potter to Brighton & Hove Albion – were major setbacks, yet the Cooper era has begun with seven wins in nine games. “He has had a big impact at the club and also on me staying,” Ayew says. “He knows what he wants and he is tough. He is pushing us towards a goal and everyone is following. “It is just the beginning and we are not going to say too much, but I believe he is a top manager.” Ayew watched from Istanbul as Potter built a Swans side packed with promising youngsters last season. Now he is relishing his role as one of Cooper’s senior men. “When I came in 2015 most of them were here already – Grimesy (Matt Grimes), Jay (Fulton), Dan, Oli,” Ayew adds. “We knew the quality they had but they grew up really quickly. It shows a lot of good work has been done. “The experienced players need to help them and protect them. We are here to take responsibility so they can keep developing.” If Swansea’s fans have revelled in the successes of their young players, they have also welcomed the return of Ayew – and their support has not gone unnoticed. “I am a player who works with a lot of affection,” Ayew says. “For me that’s very important. When I feel that, I can’t give up – it’s not possible. “Sometimes it will work very well, sometimes not, but what’s for sure is that you know you will get everything out of me.” Commitment is all Cooper will demand from a player with the quality to make a difference at Championship level. Should Ayew stay fit throughout the season, Swansea’s chances of maintaining early momentum should be significantly enhanced. The “road is very long” in the Championship, Ayew stresses, yet he is enjoying the journey. “This is where I feel good,” Ayew says. “I wake up in the morning and feel good, I come to training feeling happy. “My aim is to have a good season and see if we can create something special at the end.” By Gareth Vincent/BBC Sport Wales]]>
READ ALSO:  Kwesi Nyantakyi denies receiving $65k from Sheikh in Anas video