Ashanti region has been ranked as the most corrupt region in the country in the health and educational sectors.

While the Ashanti Region recorded 74 per cent, the Western and Eastern regions recorded less than 50 per cent of corruption cases in the two sectors.

The survey was conducted in 49 districts across the country and covered 5, 000 respondents.

Per the findings 60 per cent of Ghanaians across the country said they have experienced corruption in the education and health sectors.

It showed that 74 per cent of the corruption cases were recorded in the Ashanti Region in the areas of education and health.

NPP manifesto was rushed; has a lot of gaps – Send-Ghana boss

“On the national scale, most of the amounts of bribe payments were generally less than 100 cedis (representing 58%) of the respondent,” the findings revealed.

However, the Western and Eastern regions including the other regions recorded less than 40 per cent of those cases.

In the health sector, the Ashanti Region again topped the chart recording 85 per cent of corruption cases. The Eastern, Western and other regions recorded less than 35 percent of the problem in the sector.

The Ghana Integrity Initiative consortium which conducted research noted corruption was endemic during the computer selection placement into secondary schools.

“Inasmuch as we are quick to point fingers at politicians, probably the biggest of it is done by civil servants and public servants,” Country Director of SEND-Ghana, George Osei-Bimpeh, said.

“We need to pay attention to that when we want to address corruption in these two sectors,” he suggested.

He underscored the need for children to be taught anti-corruption or ethics and values so that it becomes part of their formation processes, noting it will help them while growing up “to accept the fact that corruption is a something that society must not entertain”.

Reacting to the findings, the Director of Internal Audit at the Ministry of Health Edward Fiawoyife emphasised on a new policy direction to deal with corruption.

“We are doing something we call framework contracting where procurement is no more done on the national basis. The supplier is allowed to supply direct to the facility so the human is cut in a bit,” he said.

NPP manifesto was rushed; has a lot of gaps – Send-Ghana boss 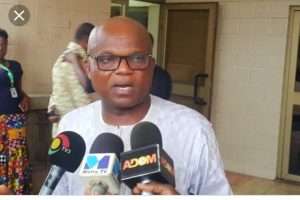