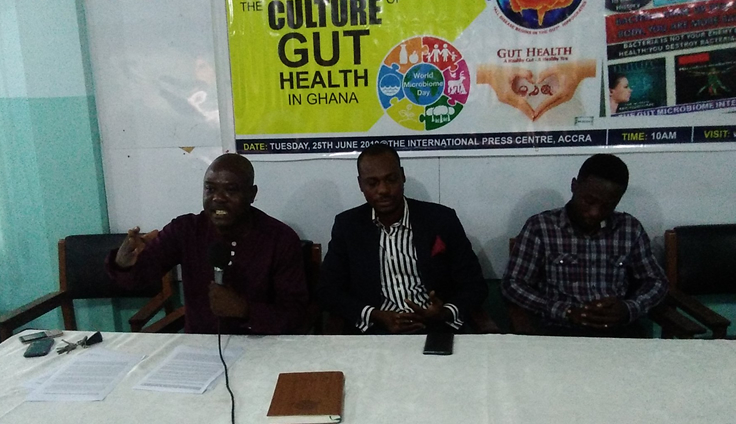 “Currently, 700,000 people die each year due to drug resistance diseases, including respiratory tract infection, sexually transmitted infections and urinary tract infections, a researcher Nyaaba-Aweeba Azongo has revealed. He has therefore called for a concerted effort between the health sector and researchers to intensify education with respect to gut health and abuse of antibiotics. Mr. Azongo who is the president of the GUT Microbiome International Trust also cautioned the general public on the abuse of antibiotics as the country joins other parts of the world to mark World Microbiome Day. This year, the theme for the celebrations centered on increasing awareness and understanding of antibiotic resistance and its effect on microbiomes and subsequent human, animal and habit microbiomes. Speaking at the launch of this year’s microbiome day in Accra, Nyaaba-Aweeba Azongo noted that it was necessary to understand the effect of abusing antibiotics as this is having severe impact on the human organs and killing many. “Our gut microbiome and its fundamental importance in our health has become more crucial in the wake of resistance to antibiotics. It has become very common these days to buy antibiotics over the counter for minor medical conditions. This is gradually breaking down our gut system and killing many who obviously do not know the impact.” On 29th April, 2019, the UN international agencies and experts released a report demanding immediate action to avert potentially disastrous drug resistance crisis. The UN warns that if no action is taken, this could cause 10 million deaths each year by year 2050 and damage to the economy as catastrophic as the 2008-2009 global financial crisis. The report also reveals that by 2030, antimicrobial resistance could force up to 24 million people into extreme poverty. The world microbiome day is a day set aside to serve as advocacy for a National Microbiota Project and to mobilize Ghanaian expertise to join their international counterparts for a collaborative research in the field of Gut Microbiome as is the current global order towards mainstreaming gut health into our health systems.

I support calls for people to be held liable for galamsey...