A justice of the Court of Appeal says Ghana’s judiciary should have blocked the public screening of the investigative piece which exposed some top judges receiving bribes to compromise justice delivery in the country. The public screening of the investigative video four years ago, according to Justice Senyo Dzamefe, has tainted the dignity and value of the judiciary. “Without mincing words, we have reduced our dignity and value the day we allowed that infamous Anas film to be screened publicly,” he told the chief justice and a gathering of judges and magistrates in Accra. Addressing the 39th annual general meeting of the Association of Magistrates and Judges Ghana (AMJG) Wednesday, Justice Dzamefe said, in his view, Ghana’s judiciary is “virtually at the ‘donkomi’ level now”. [caption id="attachment_137132" align="aligncenter" width="450"] 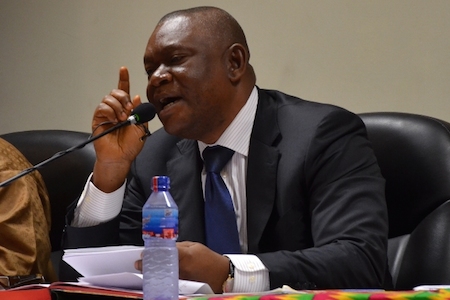 Justice Senyo Dzamefe[/caption] Justice Dzamefe who is also the president of the AMJG contended that the judiciary “did not handle that [Anas] situation professionally” and as a result, “shot ourselves in the foot”. “It is going to take some time to restore our lost dignity,” he said, but noted “all hope is not lost though”. Over 100 implicated Anas Aremeyaw Anas in September  2015 released a video documentary of an investigation which showed more than 100 judicial staff including court clerks and 34 judges at the country’s High Courts, District and Magistrate courts allegedly taking bribes from litigants to compromise justice delivery in cases before them in the various courts. The three-hour edited video, which is the result of a two-year painstaking investigation into the judiciary by the award winning investigative journalist, triggered a number of law suit against him, his Tiger Eye PI investigation team and other individuals. Some of the High Court judges indicted in the corruption quagmire initially filed a motion in a bid to stop the public screening of the video at the Accra International Conference Centre but that failed. But that was just the beginning of a number of suits to come. Anas was caught in a legal web with some of the judges, including Justice UP Derry and Justice Mustapha Habib Logoh, filed multiple cases from the High Court through the Supreme Court to the ECOWAS court. At least 25 of the judges implicated in the scandal have since been dismissed from the Judicial Service in accordance with regulation 27 (2) of the Judicial Service Regulation 27 (2) after they were found guilty of stated misconduct.

READ ALSO:  Issues with overtime tax will be investigated and addressed - Bawumia assures
By 3news.com|Ghana]]>