All African countries now signed up to free trade area 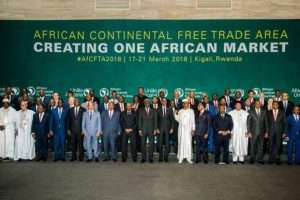 Eritrea has signed up to the African Continental Free Trade Area (AfCTFA) meaning that all countries on the continent have now agreed to the deal.

The AU says that AfCFTA will create the world’s largest free trade area.

It also estimates that implementing AfCFTA will lead to around a 60% boost in intra-African trade by 2022.

The first step is to cut tariffs for goods from countries within the bloc but the timeframe to do this is yet to be announced.

Economic superpower Nigeria signed up earlier this month leaving Eritrea as the only country outside the deal.

Eritrea did not participate in the negotiations leading to the deal because of their conflict with Ethiopia, according to the Commissioner for Trade and Industry of the AU Commission Albert Muchanga.

But the situation has changed now that there is peace between the two countries.

How AfCFTA could create millions of African millionaires