The Minister of Finance, Ken Ofori-Atta, on Thursday delivered the 2019 budget statement and economic policy of the government of President Nana Addo Dankwa Akufo-Addo.

The presentation in Parliament took about four hours.

It was on the theme: ‘A Stronger Economy for Jobs and Prosperity’.

Mr Ofori-Atta represented the president in the House as per Article 179 of the 1992 Constitution.

The budget outlined six strategic pillars of development for the government in 2019: infrastructure, agricultural modernisation, industrialisation, entrepreneurship, improving efficiency in revenue mobilisation and protecting the public purse and social intervention.

It also announced key allocations for some government priority projects.

At the end of the presentation, Mr Ofori-Atta described the budget as President Akufo-Addo’s ‘Mpuntuo budget’ to wit a progressive budget.

“Mr. Speaker, in the spirit of the season, I declare that by this budget, we bring glad tidings of great joy of hope, relief and a renewed strength. Indeed, Emmanuel God is with us.

“God bless us all and our dear country, Ghana! Rt Hon. Speaker, I so move President Akufo-Addo’s Mpuntuo budget.”

The Minority in Parliament, however, did not agree with his description.

Members brandished sheets of papers on which were summed their opinion of the budget read to them by the Minister.

The papers read: ‘Ahokyere Budget’, ‘Borrow Borrow Budget’ and ‘Made in China Budget’. 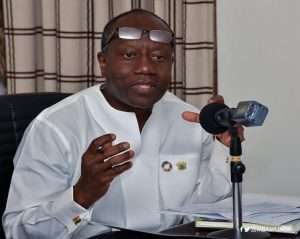