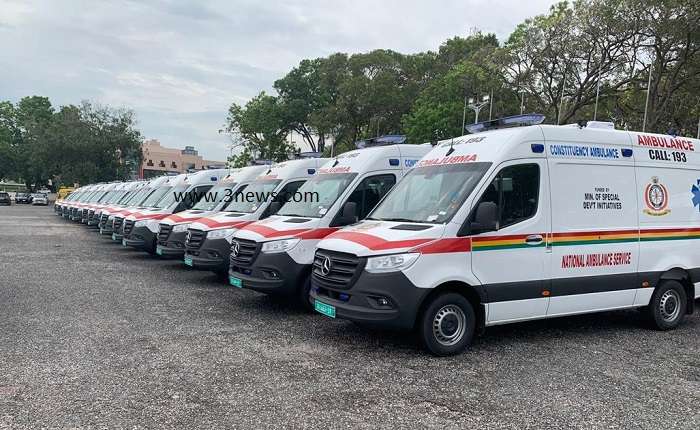 President Akufo-Addo will later Tuesday, January 28, commission ambulances procured by the government for distribution to all constituencies in fulfillment of his one-constituency one-ambulance promise.

The event, which critics including members of the opposition National Democratic Congress (NDC) describe as a “needles fanfare” will take place at the Black Star Square in Accra at 11:00 am.

The Media General Group in November 2019 led the #AmbulancesNow campaign to have the first batch of the ambulances released rather than waiting for the full complement of the 307 ambulances, but government functionaries would not budge.

President Akufo-Addo had conceded in December during his press encounter that there was enormous public pressure for the ambulances to be released but said he did not want to be accused of being discriminatory. He thus fixed January 6 for the commissioning and onward distribution.

“The Minister for Special Development Initiative told me some of the ambulances were in and asked if she should distribute them and I said no, she shouldn’t. She should wait for the others to come in so that we can distribute all at the same time…

Fortunately for us all of them will be in by the end of this month and on the 6th of January, I will commission them and the distribution will take place simultaneously and nobody will accuse me of favouritism, and so on. There is no justification on they being parked but if I was to send it here and not here, I think you know the kind of discourse that will come”, he said.

However, the Ghana Ambulance Service requested that the commissioning date be moved to January 28 to allow for the training of personnel and the digitization of the ambulances.

“Government expects the Ambulance Service to maintain this investment to ensure longevity. It is further expected that this injection will be put to good use to serve the good people of Ghana and add to ongoing efforts to secure livelihoods,” he noted.

Health Minister, Kwaku Agyeman Manu, confirmed to TV3 in an exclusive interview the exercise will be coming on Tuesday morning barring any unforeseen circumstances.

Health Minister, Kwaku Agyeman-Manu has been elected by the World Health Organisation (WHO) to serve on its executive board. He...

The ban on public gatherings introduced by government to stem the tide in the spread of the deadly coronavirus the...

‘These are not ordinary times’ – Akufo-Addo admits, turns to God over Covid-19 in Ghana