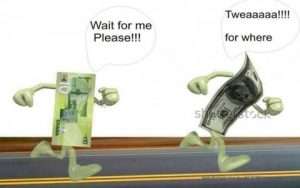 President Nana Addo Dankwa Akufo-Addo has instructed the Finance Minister to put a team together to investigate the depreciation of the cedi against the dollar and other currencies.

A bi-partisan committee is expected to start work in earnest to unravel the actual cause of cedi’s instability, the Finance Minister Ken Ofori-Attah revealed on Thursday.

“Mr. Speaker, the president has directed that I investigate the structural causes for the depreciation of the cedi and to propose measures to address the situation. The government and I will put a bi-partisan committee together to proceed immediately,” he told Parliament.

Mr Ofori-Atta was in Parliament to update the legislators on the country’s completion of the extended credit facility it entered in 2015 with the International Monetary Fund (IMF) programme. Ghana received a total disbursement of about US$925.9 million under the facility which ends on April 2, 2019

The Finance Minister was emphatic that the fall of the cedi against major currencies can’t be as a result of weak fundamentals of the economy.

“The depreciation of the cedi was not due to weak economic fundamentals but rather a combination of economic structural rigidities and apparent speculative behaviour of foreign investors and market participants.

“It is also noteworthy that while this is a challenge, the cedi has, however, performed better over the last two years than when compared, specifically from 2012 to 2016.”

“Mr Speaker, indeed, the cedi’s recovery had started even before the Eurobond was issued, and, if I may add, before the Vice-President’s visit to India.

“What the Eurobond issuance did was confirm the confidence investors have in our economy with their $21 billion rush, which supported the recovery because of our successful macroeconomic turnaround as well as the implementation of various policy measures”.

The cedi depreciation went as low as 5.80 to a dollar before it started making gains early this weak, and currently trading at 5.25 to a dollar.