File photo. President Akufo-Addo shaking hands with some workers of a road contractor in Kumasi in August 2018

Road contractors say the government cannot achieve its ‘Year of Roads’ project due to the obstinate attitude of the Finance Minister, Ken Ofori Atta, in releasing funds for road projects across the country.

Despite the President declaring the year 2020 as “Year of Roads”, the contractors say the Finance Minister has been adamant in releasing funds for such road infrastructure.

At his last Media Encounter in December last year, Nana Akufo-Addo said his government would embark on an aggressive road development across Ghana in the year 2020, saying “Next year is the year we will adopt as the year of roads.”

National chairman for the Road Contractors Mr. John Afful while speaking on Yensempa morning show on Onua FM Wednesday stressed that the government cannot accomplish the year of roads goal if adequate funds are not released.

¢1.6bn arrives at Ministry of Roads; ‘go for your money now’ – Gabby to contractors

He asserted the government has hastily awarded innumerable road contracts with no budgetary allocation, which in his view, would compel most contractors to abandon projects due to lack of funds.

Mr Afful was reacting to recent directives from Minister for Roads, Kwesi Amoako Attah to the Ghana Highway Authority to terminate and blacklist contractors who are delaying in executing their contracts.

He emphasized government’s ‘Year of Road’ promises would not be realized if road contractors are not paid to remain at sites to work.

He claimed banks are now refusing to issue loans to road contractors due to the failure to pay back in time.

The contractor lamented the situation is having a toll on their businesses making it difficult to pay workers.

“Contractors who have gone for loans to complete road projects are under severe and persistent pressure from banks,” he stated.

Mr. Afful appealed to the government to establish a bank which would solely be assigned to support road contractors with loans to execute contracts even if the government is not able to pay in due time.

97 health workers have Covid-19 in Ashanti

3-month-old baby, one other die of Covid-19 in Northern Region 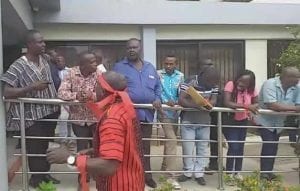 ¢1.6bn arrives at Ministry of Roads; ‘go for your money now’ – Gabby to contractors

3-month-old baby, one other die of Covid-19 in Northern Region